In the first section of the Transformers BotBots mall, there are two stores where the Shed Heads hang out: one on the first floor, one on the second floor. And in looking for a leafy green monster to review today, the ground floor has managed to deliver what is easily the worst toy in the line. 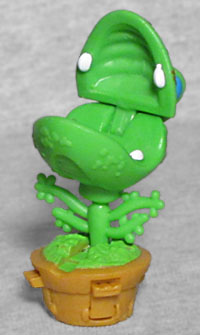 The altmode is... fine? It's a venus flytrap, which isn't exactly the hardest plant in the world to eventually turn into a robot - I mean, the thing already has a distinct head and mouth. The trap has a sculpted tongue and teeth inside it, as well. Like Rootwing, this plant is potted, for better balance. Usually a plant has multiple traps arranged around the central body, not just one large one, so this feels more like Audrey II than an actual horticultural sample; maybe those fronds growing out of the stalk are meant to be baby traps that are still growing? Plus, the inside of the "mouth" should be red (to help attract the insects it eats), but all we get here are a few red speckles on the outside.

BotBots aren't usually hard to convert, but folding the rear feet out from beneath the pot is exceptionally difficult, and the front feet want to pop off if you look at them too hard. Other than that... well, keep reading.

Don't get too close to Venus Frogtrap, she might try to eat you up. 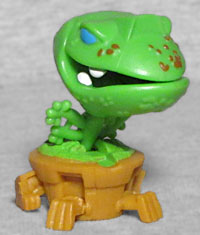 She's not mean, just hungry. She's basically a garbage disposal: she'll gobble up anything in her path. Nom nom nom!

According to the art (and the name), the robot mode is supposed to resemble a frog. It doesn't. Not even a little. All you do with the plant part is close the mouth and lean it forward slightly - it barely looks different at all! The instruction sheet at least shows it laying down near the pot, but something changed during production. Whether it was a decision on Hasbro's part or a manufacturing error, the final toy does not work the way it was planned to. Some fans have customized her, restoring the range of motion she needs to properly change, but even then the toy's just "better," not "great." 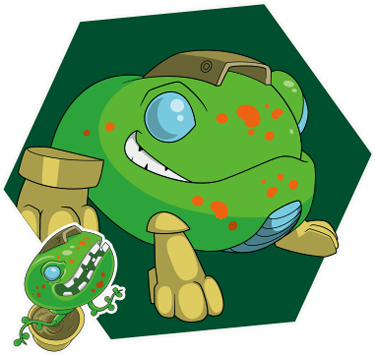 Venus Frogtrap is available either blind-packed, as #14, or in a Greaser Gang 8-pack. The mold was also reused in Series 3, but it was no better there than it is here.