The holiday store in the Transformers BotBots mall is tucked back into a corner on the ground floor - which may not seem like prime real estate for foot traffic, but the elevator is nearby and the arcade and toy store are on either side of it, so that's probably the first area I'd hit if I were going to this mall. Anyway, all the Seasons Greeters are hanging out down there, with Halloween Knight just being a tripping hazard in the middle of the floor. 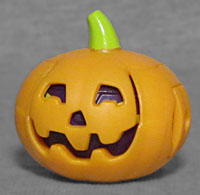 Jack o'lanterns were not originally physical objects: in the late 17th century, it was a regional variant name for will-o-the-wisps, floating lights seen off in the distance. The practice of carving vegetables goes back way further than that, though! This little pumpkin has a very cheery face, with smiling eyes and a happy mouth. There are dark seams around the face that betray the disguise a bit, but this could easily be an in-scale accessory for any number of figures.

To convert, pull the arms out to the sides, fold down the legs, remove the lid and face, and flip up the tiny little horns from within. Not too complicated.

Halloween Knight is destined to someday battle with a mystical candy corn dragon on Halloween. Each year, the deceptive dragon takes flight and eludes her sword. But her oath is strong, and she won't give up her quest 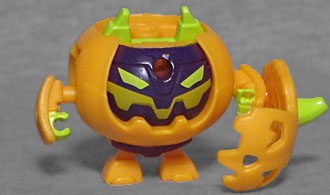 Halloween Knight is not the first BotBot to come with an accessory, but she is the first we've reviewed: weirdly, it's not the sword mentioned in her bio, but is instead a shield. Or maybe a giant claw. In addition to the arms, there's a hole on the back, so you could store the piece back there as well. Wonder if the original plan was just to have the lid/face hinge up and stick above the head? Her face looks quite devilish, with its angled eyes and little horns, but the orange "mouth" paint isn't thick enough to adequately cover the purple beneath it. Making the hands and horns green to match the pumpkin's stem brings a pleasing balance to the design. 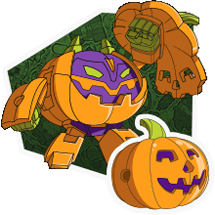 Halloween Knight is available three ways: a Seasons Greeters 5-pack (the same one that had Latte Spice Whirl), or in 8-packs based on the Fresh Squeezes or Goo Goo Groupies.