Today's review of the X-Men Marvel Legends Theta Sentinel Build-A-Figure brought to a close the May 2021 X-Men Week, but there's still one more thing to discuss: the packaging.

The boxes are the standard ML style, but the sides and back are a clean white, which makes them stand out from all the other series. To really tie it in to the House of X/​Powers of X story, the figure's name on the front and back is written in Krakoan, with the English reserved for the sides (the Krakoan is also used on the cardboard insert behind the tray). 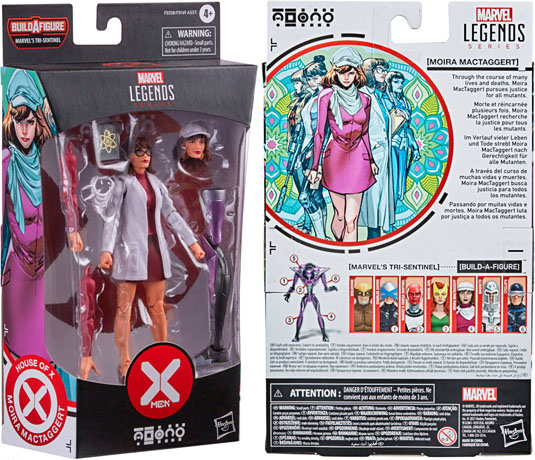 And then, rather than one of the artists they usually work with, Hasbro commissioned Pepe Larraz and Marte Garcia to create the character portraits. Larraz was the guy who drew HoX (and has a very Stuart Immonen vibe to his work, which is great), while Garcia handled the coloring on both books, creating a cohesive look for the crossover. Hasbro's even put interviews with both artists on their site, including concept sketches and a time-lapse coloring video to show how the pieces came together.

Then the graphic design (which doesn't get any credit, sadly) takes those characters and drops them into circles with a broken outline that feels reminiscent of the Krakoan script, making it all feel like one whole piece, rather than the work of three or more people.

There is one thing we would have changed, however: in addition to the English, French, German, Spanish, and Portuguese bio text on the back, they should have included a Krakoan one, too. Just as a fun Easter egg.