When the second series of Transformers BotBots came out, the diagram of the mall showed us that the Music Mob had two stores: one on the third floor, and another right below it on the second. Today's bot is rocking out in front of the lower locale. 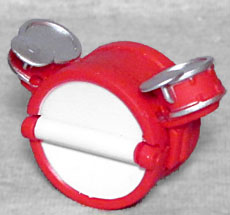 There's a drum kit in the mall music store? I suppose that's possible: an entire wall of guitars, displays of whatever stuff a high school band would play, then a single drum kit crowded up against one wall. This one is red, with a white drum head on the big bass, then silver on the two smaller drums and the cymbals. A real kit would have more (just ask Animal), but this is a decent representation for the size.

BotBots convert easily. Here, you just fold down the feet and the front of the drum, then pull the arms out to the side.

Dumbeats is not capable of being quiet. He's big, loud, and, 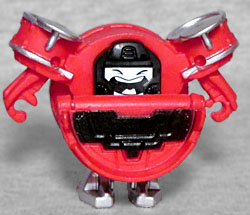 the other bots have to admit, totally lovable. He smashes his way into and out of every situation, whether he's crashing a party or going out with a bang.

This definitely looks like a big, boisterous 'bot. The Chris Farleytron 1000. He's wide and round, with a big stomach, and the fact that there are still drums on top of his arms makes him look like he's wearing big shoulder pads. The face is painted with a gigantic happy laugh. The coolest feature, though, has to be the feet: they look like a drum kit's kick pedals! They don't function that way in the altmode, so it's just a clever piece of design. 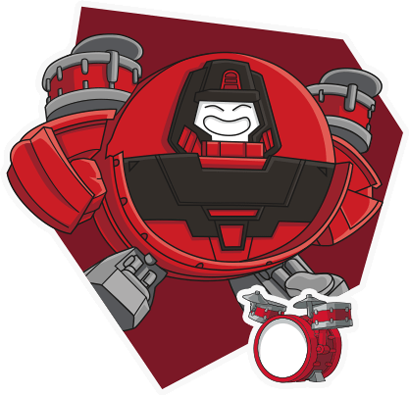 Dumbeats is available either in the Series 2 blind-packs (as #15), or in two Music Mob 5-packs.