If you live in a part of the US with lax laws and abundant a-holes, then you've probably been hearing people setting off their own fireworks for the past week or so. The odds that there's a fireworks store inside the BotBots mall are low, but there might be one nearby. Especially if the mall is near the border with a state that doesn't have legal firework sales.

The Seasons Greeters are all holiday-themed, and while fireworks can be used for various holidays 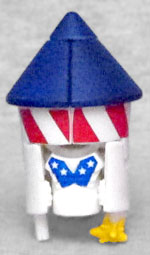 (New Year's, Guy Fawkes Day, Diwali), the fact that this rocket is white and blue with red stripes makes it clear it's a Fourth of July banger. If you're not a total trash pile, you've probably never seen a firework in person, so you might not grok what's going on here. The stick coming out the bottom you jab into the ground, to keep the rocket pointed in a generally upward direction without your dumb ass having to hold it. Then you light the fuse and a few seconds later, all your neighbors hate you! Couldn't be simpler. Props to the Hasbro design team for including the sparkling fire at the end of the wick, giving the toy a second point of contact with the ground and allowing you to stand it up unsupported it if you have some kind of magic genie-granted balancing powers.

BotBots are easy to convert. All you need to do here is split the top of the rocket, fold it down, spear the arms, and rotate the legs down from underneath.

Flare Devil is dashing, daring and doubly adventurous. Whether it's launching herself through the air or a challenge to see who can make the loudest explosion, she'll be there in a flash. Go ahead, dare her to do something. Every time a challenge is made, 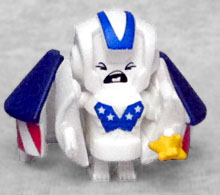 the fuse is lit, and she shoots into action. KAPOW!

In this mode, it's clear the colors are less "Fourth of July" and more "Evel Knievel" - it just so happens that the archetypal modern daredevil happened to wear star-spangled costumes. If he'd worn red, we'd have been thinking Chinese New Year. The rocket's cone ends up working like a cape here. The hands have a stick and a fuse on them, which isn't great, and for some reason her feet are sculpted with toes - why is the thrillseeker barefoot? The face looks distressed, which makes sense if you imagine her screaming as she blasts off across the mall. 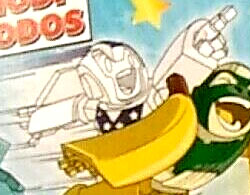 Flare Devil is part of series 4, and is available in a Home Rangers 5-pack or a Wilderness Troop 8-pack.