So far all the Retro Replays we've reviewed have been repaints of existing molds. While that might have been a fun gimmick for a tribe based on "the past," It also would have been kind of limiting. That's why today's BotBot is something new!

Ah, cassette tapes! Will there ever be a more reliable, permanent form of data storage than little magnetic strips that can get easily tangled? I say there won't! This is a portable tape deck, 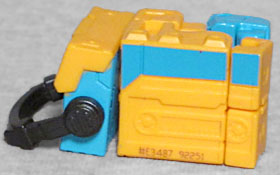 as evidenced by the carrying handle across the top - at least, that's what it seemed to be at first glance. Looking again, it appears to be a pair of adjustable earphones that are merely resting on the player. Maybe this isn't one item at all, but several that are just near each other, like Q.U.R.O.B.O. 6000? That would explain why there seem to be two places that have tapes: on the side, with a black body and yellow spools, and on the front but unpainted. So instead of being a large portable player, maybe it's a player, a tape in its case, and a pair of headphones.

As of Series 4, BotBots no longer include instructions, so we just have to guess how Snorg the Conquerer [sic] converts. But it's easier going from altmode to robot than robot to altmode. The colors do help guide you, though.

Snorg so powerful, Snorg conquer world... with music! Snorg starry-eyed tape-playing bot. Snorg out to show world how he kick it old school. When Snorg get re-wound up, Snorg press play and unleash beast within. 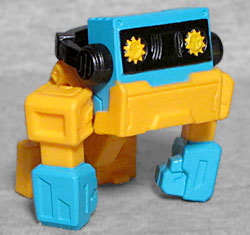 When Snorg crank up volume, Snorg blast bots with sick old-school beats. When Snorg get too out of control, Snorg press pause until Snorg calm down again.

Snorg the Conquerer's robot mode is very simian - he looks like a gorilla, walking on his knuckles while his short rear legs stand upright. The (painted) tape becomes the face, which looks like it's ready to chomp something. The yellow and blue colorscheme isn't the greatest, but it makes sense enough if this is supposed to be from the '70s or '80s. He moves at the neck, shoulders, and hips, all balljoints. 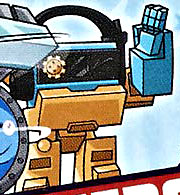 Snorg is available blind-packed as #18, in a Movie Moguls 8-pack, or a Wilderness Troop 8-pack. None of them do anything to explain WTF is up with his name, though.