Back during Series 2, the Transformers BotBots are divided into various teams, based on what store in the mall they hail from. The Greaser Gang, for instance, are all fast food items. They've been around since Series 1, where the central wing of the mall had one restaurant and one kiosk. Angry Cheese is upstairs yelling like a maniac. 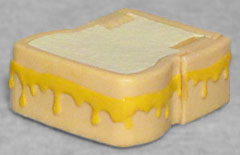 Maybe the bread, if someone was getting fancy, but even that is an outside chance. The sandwich's origins go back to the beginning of the 20th century, where an openfaced "cheese dream" was a fast, basic thing you could throw together for almost no money. Butter, bread, and cheese? Those were staples, not huge extravagances, even during the Great Depression. This is a good-lookin' sandwich, with warm yellow cheese oozing out the sides. Now I'm hungry!

BotBots convert easily. Angry Cheese gets it done by opening the flaps around the body, spread the arms a little, pull down the legs, and lower the flap over the face. 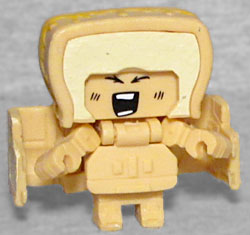 She likes to yell. A lot. Her cheese rage gives her strange melting powers. When she's in a bad mood, she can melt things into a puddle of yummy cheesy goop.

Sandwichtron looks more like she's yawning than yelling, in all honesty. She looks precisely like you'd expect a robot made from a sandwich to look, with remnants of bread around the face and the top of the head. The panels that open end up behind the back, which makes it really hard to get her to stand - she wants to fall over backwards. And since the only joints are the shoulders, there's not much you can do about it. 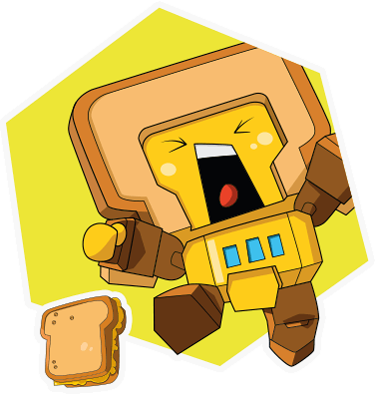 Angry Cheese is available in a Greaser Gang or a Jock Squad 8-pack.