Transformers BotBots have something for everyone in their mall. There are toy stores, bakeries, several kinds of restaurants... and if you look at the west wing, they even have garbage no one would ever need! No, not the Spoiled Rottens, the Swag Stylers.

This is one BotBot where you really need the name to decipher what it's supposed to be. A swirly red bottle with a fancy golden lid? Even knowing what tribe it belongs to doesn't offer any clues - you're likely to think it's just a fancy vase or something. 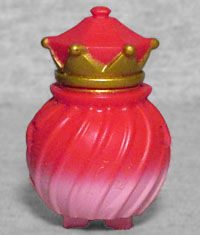 But no, it's a perfume bottle. Presumably you need to take that lid off to reveal the spritzer, because there's no way to apply the contents from inside the way it is now. Perfume (as an item by itself) is even more useless than an iron these days - while humans have been using things to change their scent pretty much as long as there have been humans at all, and the modern idea of perfume has been around since the 19th century, the new-fangled concept of "taking a damn bath once in a while" has rendered the need for direct perfumes and colognes obsolete. Nothing worse than walking past someone who reeks of synthetic flowers or whatever that stuff is supposed to smell like. The best thing you can say about perfume is that techniques in its creation had an influence on the development of chemistry.

It's not hard to convert BotBots, but this one really sets new standards. Start by opening the arms, then do nothing else.

Make way for Prince Perfumius! His regal scent is made from the oil of 12 dozen roses and flakes of pure Energon. He is treated like royalty 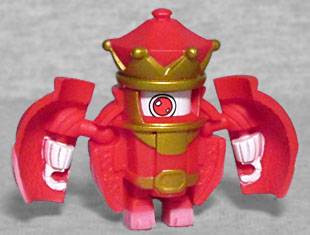 by the other, less fancy-smelling smelly stuff.

A woman named Tapputi-Belatekallim is recognized as the world's first recorded chemist, a perfume-maker who was also overseer of the Mesopotamian Royal Palace - so clearly, the connection between perfumes and royalty goes back a long way. This isn't a terrible robot design, with the bottle's lid becoming a crown. The arms are molded right into the shell, and sculpted to look like puffy sleeves. Turning the crown also allows you to move his one giant eye side to side, adding some personality to the robot. 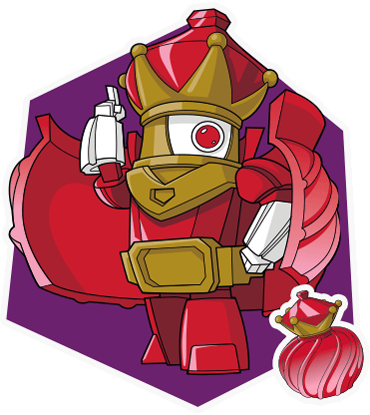 Prince Perfumius is available in two Swag Stylers 8-packs. The mold was also reused in Series 3 as Perfumigator, with a much nicer purple colorscheme.