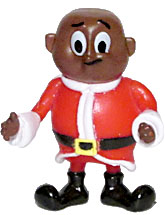 This entry was posted in Advent calendars, I Seem to Recognize Your Face, Jakks and tagged Elf. Bookmark the permalink.