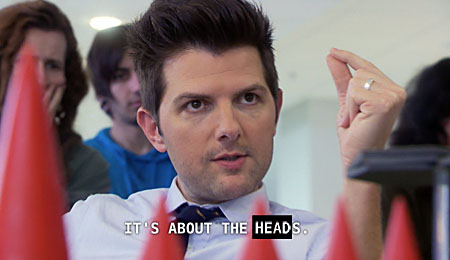 When the Kickstarter began, each figure included three heads: one generic, one world leader, and one related national figure. As the campaign went along, more and more bonus heads were unlocked, so the final figures each include six. We already talked about the infantry soldier heads in the main review, so let's look at the rest! 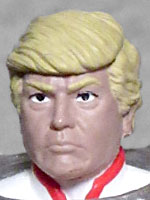 We begin with Commander Trump, the Space Force Red Leader. This is a very good sculpt, for a 4" figure - it's got the big bags under the eyes, the saggy jowls, the double chin, the frown of a loser, everything! The hair is a bit too solid, but there's no way to mold "wispy and airy" in plastic. It also looks a bit strange on the space suit, because the Space Force body is so thin; imagine how many pairs of Space-Spanx he'd have to roll himself into in order to fit inside there! If they'd made a fatter body, then we could have looked forward to William Howard Taft, Grover Cleveland, and Bill Clinton heads. The biggest problem, though, is the skintone: a lot of these figures are going to suffer from the desaturated skin that's currently plaguing the industry, but if any toy should not be blue, it's this one. In space, no one can hear you spray-tan. 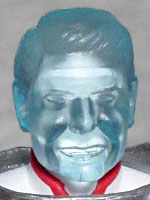 The second head is the Ghost of Ronald Reagan. Feels like some commentary, there. The Republican Spectre is molded entirely from a light blue translucent plastic; if you've ever wanted to make a Ronald Reagan Force Ghost, now's your opportunity! Unfortunately, that plastic, coupled with the total lack of paint, makes the details hard to see. You know what's cool, though? When you put the head on the body, the white plastic of the neck's balljoint shows through, helping reflect light inside the mold and helping the detail stand out. Alone, this is a blue lump of plastic; in use, it's a phantasmal ex-President! I don't know if that was intentional or fortunate circumstance, but it makes the head better. 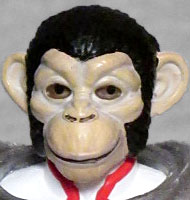 The first unlock came at $40,000, and Space Force Red got Coco, the Astronaut Space Monkey. This could just be a random weird inclusion, but since the most famous movie Ronald Reagan ever starred in as an actor was Bedtime for Bonzo, about a psychology professor trying to teach human ethics to a chimpanzee, it feels like a specific reference. (Coincidentally, "trying to teach human ethics to a chimpanzee" also perfectly encapsulates what it feels like to deal with Republicans on any important issues.) The light paint wash makes the face look dusty, and the way the eyes are painted makes it look like someone wearing a mask rather than being a real chimp. Like they're going to reassure Bruno Mars that he's the prettiest at the store. 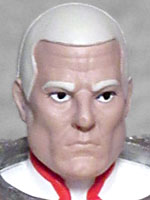 The $50k unlock was supposed to be Vice President Pence, but the jawline and the chisseled cheeks make it look more like Johnny Quest's Race Bannon. The real Mike Pence is a sickly looking man with skin like balled-up tissue paper and the neck of a 90-year-old with an eating disorder. This toy looks like they were trying to train a neural network AI to predict "Gigachad." Repaint this bronze and you've got yourself a Doc Savage. He doesn't look like an anti-queer weirdo with enough sexual hangups to make Freud feel relevant again, so if nobody told you who this was, you probably wouldn't guess. 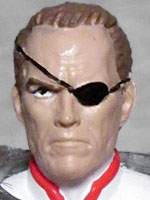 And on the topic of not knowing who someone is, who is this? General Flag, that's who! Not the General Flagg of GI Joe fame, because that one had two G's in his name, while this one only has one. With the brown hair and the eyepatch, he looks a bit like Nick Fury, Maybe it's supposed to be Charlton Heston? From when he played Nick Fury in True Lies. Chin's not quite square enough, but he does have the determined frown. Until someone says different, we have to assume this is simply some random soldier man unlocked at $60k.

2 Responses to US Space Force addendum