In today's Soundwave review, we talked about how keeping the robot's functioning chest compartment was a top priority. The reason for that? Because Hasbro also made a Ravage to go with him!

The first in a new "Core" Class segment of the Studio Series line, Ravage doesn't get a number in the list, or even much of a backdrop. He's just sold in his robot mode in a tiny box with no plastic in the window that lets you see him inside.

Ravage was designed for Bumblebee by ILM artists Stephen Zavala and Karl Lindberg. The first pass at the design was strongly G1, just like the rest of the Transformers in that scene, but as the work progressed, they got wilder with him, 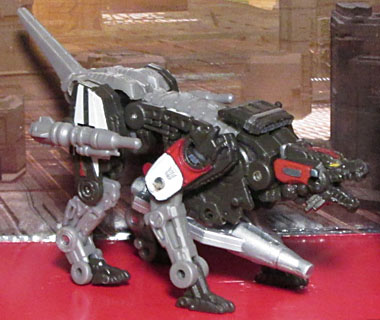 making him a blend of wolf, puma, dragon... anything at all that would make him look scary enough to be a threat to Autobots several times his size. I admit, I like the first draft better, but this is still closer to the classic design than the existing movie Ravage was. This toy is really detailed for its size, capturing the movie renders very well. He moves at the jaw, neck, shoulders, elbows, wrists, hips, knees, feet, and toes, plus you can reposition his tail slightly thanks to the way he converts. He includes rockets that plug into his rear legs, a flat missile pod on his shoulders, and a familiar-looking blaster that can plug into his chest.

Ravage's altmode is... a block. Hey, he's not the first to change into one of those! But the point of this block is that he can fit inside Soundwave's chest, just like the cassette used to do

back in the '80s! There's a spring-loaded "eject button" on Soundwave's shoulder that will let the door pop open, and you can fit Ravage inside! Barely. It's a ridiculously tight squeeze, to the point where his feet might pop off when you're trying to get him in or out. Also, with Ravage in the chest compartment, the door can't close unless you open the robot's back panel slightly (the faux cassette deck door that's on there for his vehicle mode sticks out a little, but it's just enough to make Ravage too big for the space).

While all the missile parts can stay attached to Ravage while he's in this mode, the big blaster can't. And why's that? Because it was never really intended for him anyway: it's clearly meant to be the barrel to G1 Soundwave's concussion blaster, and so it sized to fit in the tip of the robot's shoulder cannon. That also explains why the peg will allow him to hold it in his hand and not just wear it on his shoulder. 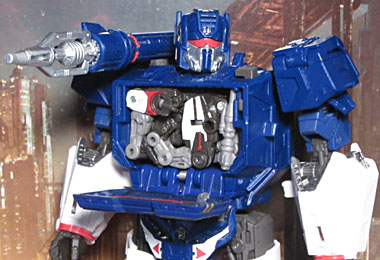 I didn't know Ravage was coming, but then, I didn't know Soundwave was coming, either. I just found Big Blue at Walmart one day and picked him up on a whim, then found a single sample of Ravage a week or so later; and not even in the regular toy section: someone had left him back by the "collector" stuff back in electronics. Lucky happenstance for me! Ravage isn't a great toy by himself, but he's not meant to be used by himself. He's meant to be a glorified accessory pack for Soundwave, and at that, he performs wonderfully.