Guess who's back! Back again!

The original Doom was such a success 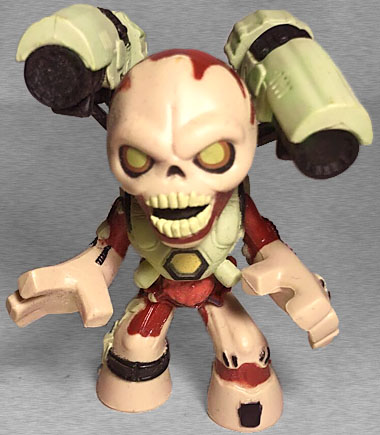 that id Software delivered its sequel only a scant 10 months later. Can you imagine? Dropping a genre-defining masterpiece and then almost immediately following it up with something just as good? And not just as a glorified map pack, but as a true growth of the project, with new weapons and new enemies.

Apparently when a demon dies, they pick him up, dust him off, wire him some combat gear, and send him back into battle. No rest for the wicked, eh? They fire homing missiles that do somewhere between 20 and 60,000 HP damage to the player, come in packs, are generally dicks, and sound like a kitten going through a wheat thresher.

The Revenant isn't as iconic as some other Doom enemies, but it's up there. A zombie with shoulder-mounted rocket launchers? Yeah, not a lot of properties that could belong to. Like Pinky, the Revenant is smaller than it should be - barely as tall 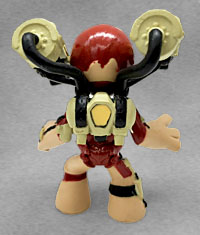 as Doomothy J. Guyerton, when in the games they're much taller. The excuse in Doom 2016 is that a mutation caused people's skeletons to start growing, without the meaty parts of the body following suit, eventually ripping them apart.

The zombie part is a very pleasant shade of pinkish tan, with big red sections of exposed musculature, while the rocket launcher and other metal parts (harness, mechanical implants in the arm and leg) are a bit more beige. Its eyes are yellow rimmed with orange, and the teeth bone white. And are those his exposed guts beneath the chest panel? It's too bad this set didn't have silly variants like Heroes of the Storm did, or they could have given the Revenant his "Doot" skin.

The Revenant was available in a 1:24 ratio, or one in every two cases.