In 2005, Sufjan Stevens released the concept album Illinoise. All the songs were inspired by the Prairie State, and the album art followed suit. Artist Divya Srinivasan combined uniquely Illinoisan imagery like Al Capone, the Chicago skyline, Murphy the goat, and Superman. Because of the town of Metropolis, IL. 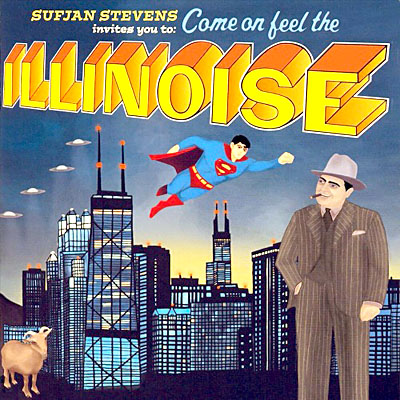 Stevens' record label, Asthmatic Kitty, was smart enough to realize that hey, maybe DC Comics would be pissed that they were selling a commercial product with DC's intellectual property displayed prominently right on the front, so they did a recall. (For their part, DC let it slide, allowing the label to sell any copies they'd already released, but asked that they change it for the future.)

As an immediate solution, Asthmatic Kitty put a sticker of balloons over the image of Superman. On the next printing, there was just a big blank space there. But that looked weird, so for the third printing, they included the balloons as part of the art.

In 2015, there were plans for a 10th anniversary release of the album. Rather than balloons or a blank, they got in touch with Marvel and got permission to put Blue Marvel in the sky over his hometown. 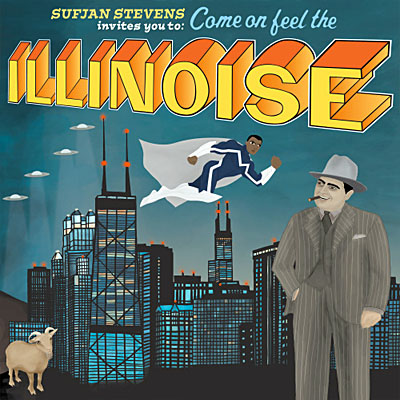 Not as iconic, but much less legally dubious. The double LP was pressed in "Antimatter Blue" and "Cape White" vinyls, really embracing the presence of their new hero.

This entry was posted in addendums, DC, Marvel, videos and tagged Avengers, Superman. Bookmark the permalink.