This is the latest in a series (of indefinite length and regularity) of blog posts memorializing cancelled toys. Our figure today is Marvel Legends Professor X.

Originally, ToyBiz wanted to make Prof. X one of Series 9's variants - there would have been a version in his hoverchair from the Jim Lee era. But with the inclusion of the Galactus piece, the cost of production would have been too high, so the idea was scrapped. 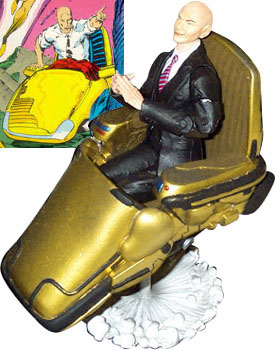 As you can see, Chuck would have gotten a change of clothes, as well, trading his blue suit for a black one.

There was some question of holding the figure back two series, so they could have included the alternate chair, but as Jesse Falcon said, there's just something wrong about putting a guy in a wheelchair in a group called "Legendary Riders."