Tasked with eliminating the worst threats to mutantkind, X-Force 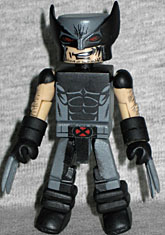 is a covert black-ops group led by one of the most deadly mutants in the world - Wolverine. His killer instincts, Adamantium claws and heightened senses ensure that Wolverine will always get the job done...

X-Force Wolverine. It's a Wolverine wearing black and grey. Eight series later we got a Warpath to go with him, but at the time he was alone. He uses the same mask and hair as Series 28 Wolverine, he's just got a new costume. Part of that comprises new bands around the forearms and shins, to give him unique boots and gloves. Even his claws are darker than usual! He comes with plain hands, and despite being the 28th Wolverine, he's only the second one shown smiling.

Before he joined the X-Men as Wolverine, Canadian soldier 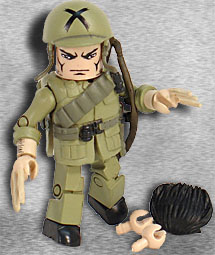 James Howlett served alongside Captain America, Bucky and others during World War II - something Wolverine himself only discovered after the memories of his past were restored.

This set was the one in Series 29 that had a variant, and it was a variant of Wolverine. Yes, meaning that we got Wolverine #29 in Series 29. Did they plan it that way? An average of one new Wolverine in every series? Let's hope not. This one is WWII Wolverine - yes, even though there had just been a WWII Wolverine a month or so before. That one was based on the movie, not the comics. This one uses the same mold, but a lighter green, bone claws, and the "rolled up" sleeves. He's got plain hands, a machine gun, and a big X painted on his helmet. 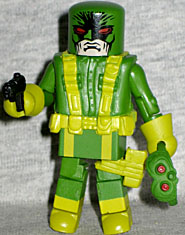 The trademark look for Hydra is their green and yellow uniform, and this figure delivers. Well, green and lighter green. He's wearing a big chest cap that puts him in something of a tactical jacket rather than the jumpsuit/smock thing they usually wear. It still has the H-shaped suspenders, though, so no worries about him not looking like a Hydra Agent. The coat is sculpted with a utility belt and a large pad on the back. He has large gloves, and his entire face is a cap over the Minimate head. Still painted well, though. There are a pair of tech goggles that are large enough to fit over the hood. 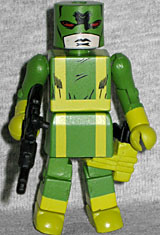 Since the Hydra Agent is the army-builder for this series, Art Asylum decided to give us some display options. Yeah, a total army of identical guys is intimidating, but a little variety never hurt anyone (no matter what Rustin says). If you remove the head cap and the jacket, you'll find a more "classic" Hydra soldier, with thick black shadows that seem to suggest Jack Kirby's artwork. He also gets a pair of plain (green) hands to replace the gloves. There's a holster on the left leg to hold the small pistol, and he also has a black version of the rifle that came with Punisher.

When this set was released, it was pretty good: you got a new Wolverine (or a variant) and a Hydra soldier with two different looks. But then there came an X-Force box set with a nearly identical Wolverine plus three other figures, making this completely superfluous. The Hydra Agent is still cool, though, so maybe try to pick up some loose ones.