yo - I created Elseworlds

Now, Rustin hates this story. It infuriates him every time I tell it (which, admittedly, will only be three times, counting this one). He says I'm insane, though he doesn't dispute the facts - just my interpretation of them. Here we go:

SDCC '03 was my first trip to the fanboy Mecca that is Comic Con International, and also where I first met Rustin. Of course, he was none too pleased with me at first.

See, we both attended the "DC Direct Brainstorming Session" panel on Thursday afternoon (2:30-3:30, Room 19). I asked DCD's Georg Brewer why the figures were so much more expensive than Marvel Legends when ML had so much more to offer. His answer was very honest: he said he didn't know how ToyBiz did it, and wished he did. That's the kind of straight talk I can respect. But it pissed off Rustin, who has a total mad-on for ToyBiz.

Near the end of the panel, they opened up the floor for suggestions. You know, what product people would like to see in the future. I raised my hand and suggested a line of Elseworlds figures; not from one particular story, but from Elseworlds as a whole. I figured it would have more legs than a single, story-specific line. That was bad luck for Rustin, though, who was apparently about to suggest the same thing. D'oh! 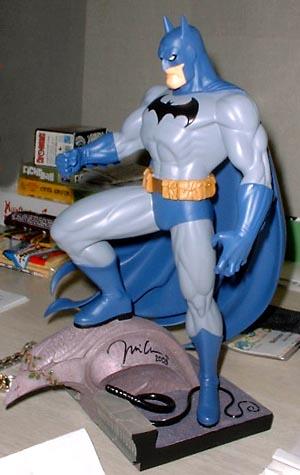 It might have been fine, except that the fine DCD folks were giving away a new statue for the best suggestion. They narrowed down their choices to my Elseworlds line, and one other (which, I'm sad to admit, I no longer recall. If whoever made the other suggestion is out there and can set me straight, I'd love to hear from you). They put it to a vote in the room and, by round of applause, I won the statue. For which someone had offered me $600 before I even left the room. And it all could have been Rustin's, if only they'd called on him first.

The statue, as you can see, is the Jim Lee "Hush" statue. It's actually the artist's proof, the hand-painted version that shows off what the final production samples will look like. And if that wasn't rare enough, it's also signed by Jim Lee, who always had impossibly long lines for his signings. Score!

Anyway, as I understand it, Rustin's reaction when I won was something along the lines of "oh, [crap], it's that Marvel Legends guy." He was not pleased. But it all worked out okay in the end, as evidenced by the fact that he is a happy and productive OAFE member today.

The Elseworlds line is up to Series 3, now, with no signs of stopping. And it always gives me a happy little feeling to pretend that it really is my doing...

This entry was posted in announcements, DC, DC Direct and tagged Batman. Bookmark the permalink.

3 Responses to yo - I created Elseworlds