The story of the first Alvistide 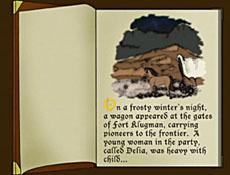 n a frosty winter's night, a wagon appeared at the gates of Fort Klugman carrying pioneers to the frontier. A young woman in the party, called Delia, was heavy with child. And though she had journeyed with the virile young men for nigh on one year, none had lain with her, though she was comely. 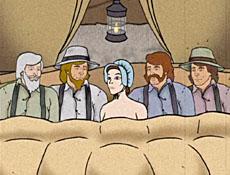 And on this frosty winter's night, young Delia's water broke, almost freezing her to the seat of the wagon. And the pioneers beseeched the soldiers to grant them entrance, so that she could give birth to her child in the hospital there. But due to an outbreak of syphilis among the soldiers, the hospital was full. And so there in the stable, among the feed and tack and the... the... whatsis, Delia gave birth to a son, whom she called Alvis, as was her wont. And since none of the men in the party were the father, it was decided among them that the birth of this child must truly be a miracle.

And it was so, for above the fort, there suddenly and miraculously appeared an awesome and mighty comet. And so brilliant was its light, that there came from all the tribes, which the soldiers had not yet decimated, shamans. And they rode upon buffalo as was their heathen custom, bearing gifts, offerings of whiskey and firearms. And when the shamans saw the child, they were in awe, for he glowed as bathed in the light which was truly not of this world. 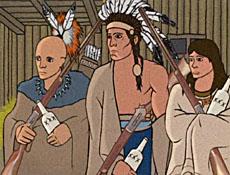 Now drink with me deeply of the bourbon, scotch and rye until such time as we are fighting drunk. Then we shall find - and beat the asses of - the non-believers who ruined my feast. 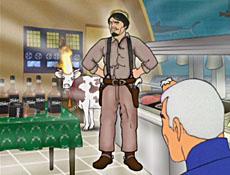 Baby Alvis is a miraculous miracle incarnate. Alvis parted the Rio Grande. Alvis was the holiest man ever to slap iron. He killed for your sins! But only for revenge. "Vengeance is mine," quoth Alvis. Then he shot that guy right in the freakin' face.

Alvis bless us, every one.

This entry was posted in videos and tagged Adult Swim. Bookmark the permalink.

4 Responses to The story of the first Alvistide