After Devil's Due Publishing effectively capped off the GI Joe universe with their spectacular "World War III" storyline, there was no question that IDW was going to go the reboot route when they started their book. However, DDP tried something similar with their GI Joe: Reloaded book, and that didn't really take off. Will IDW be able to make it work? Their first issue came out this week, so let's take a look. 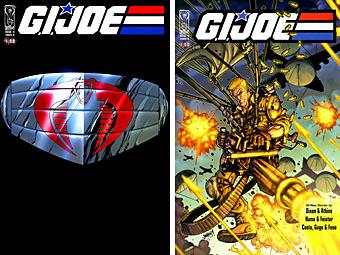 IDW is actually going to be publishing three Joe books, and this issue previews them all for a dollar. The first story, "One Word", is written by Chuck Dixon, and has much more dialogue than the title may suggest. Duke is leading a small 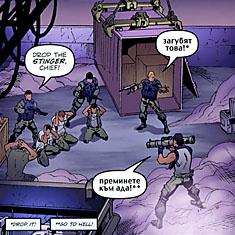 team through a shipyard in Istanbul, and the narration is presented as an after-action report.

The mission involves gun-runners trying to smuggle contraband into the US, and the Joes trying to stop them. Okay, so that's not entirely unexpected. However, the team is presented as just any other special forces unit: no fancy costumes, no laser weapons, just guys in camo and tac vests. The action should appeal to fans of 24 just as much as fans of GI Joe - this could just as easily have been Jack Bauer instead of Duke. Robert Atkins' artwork is fine, though a bit heavy on the inks. Of course, the action takes place at night, and when an explosion lights the sky, the shadows disappear - proof that it was an intentional choice.

Our next story is "In or Out?", an endorsement of the west coast's most popular regional burger chain. Or, wait, no, that's In-N-Out. This is the preview for Larry Hama's book, GI Joe: Origins and is set some time prior to "One Word". 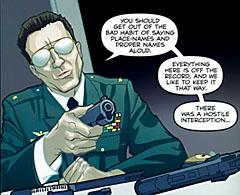 We get to see Hawk recruiting a new soldier, and a recap of the leadership skills he displayed when his convoy was ambushed.

Tom Feister's art is clean and simple, almost cartoony - but still manages to convey a lot of emotion and doesn't go overboard. It also leaves a lot of space for the color to set a mood. This is just a brief five pages, but gives us a good idea of what Hama's book is going to be: a look at where the Joes came from and what they were doing before they got recruited for the team. In other words, the equivalent of DDP's Declassified titles. But Larry Hama's ability to characterize the Joes is what made us care about them in the first place, so Origins is one to keep an eye on. 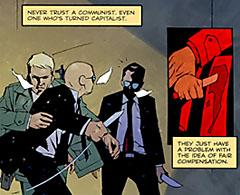 this one focuses on a man with so many fake identities that he can't even remember what name he's using, being headhunted and ambushed at the same time; of course, since this comic is going to focus on the rise of the enemy, it's probably not much of a surprise where he ends up.

The back of the book contains two pages of character designs by Robert Atkins - Duke, Scarlett, Snake-Eyes, Hawk, Destro, Roadblock Heavy Duty and the Baroness - and a two-page interview with all four writers. The final page is a "Confidential Field Report" designed to pump up the audience for the upcoming series. And really, it does that job well.

GI Joe #0 is a great book. It makes all three of IDW's upcoming series look really good, and will get you excited about the debuts. Heck, even if it doesn't, picking it up will only set you back a buck, and you'll get three cool snippets of the GI Joe universe. Head over to your local comic shop, and give the new GI Joe a try. Just be warned, if you get hooked, you'll have three ongoing series to keep up with.