Well this was quick! eMummy is back with more custom Xevoz designs! 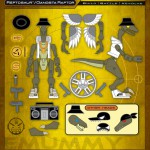 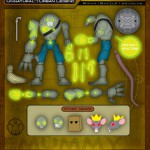 "Gangsta Raptor." Oi. That's just PAINFUL! Bad puns are bad. I'm just not feeling this guy. His "gangsta" parts would have been good "joke" parts on a different figure, but to make that the driving force of his design? Like if Dune Stinger was entirely based on his sombrero. You know, that would actually be pretty cool. I TAKE IT ALL BACK! The boombox needs some spicing up, and the hubcap is just weird.

As far as designs go, Urban Legend would never have been able to light up that way. Clear plastic or GITD would have been more likely. It's cool that you can turn him into a rat king or the Toxic Avenger. Or a CHUD.

Sadly, this is the end of the line for these custom designs. eMummy has said he plans to move on artistically, rather than continuing to retread old ground. What a shame! Though to be fair, the line died in 2005, and he started these drawings in 2007, so the fact that it's lasted this long is an amazing feat in itself. Thanks, eMummy, for keeping the dream of the Xevoz alive and adding so many awesome "what ifs" to the toyline!