Some have wondered whether Zombie Ghostface will appear in Scream 4. I certainly don't know, but allow me to editorialize for a moment.

The aged, cracked mask (which is a real FunWorld product, 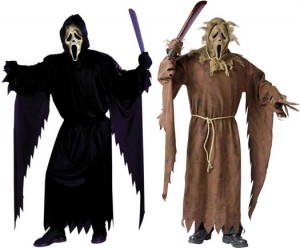 along with a cool Scarecrow version that I wish we'd get a toy of - SDCC exclusive, please NECA?) really looks a lot like the revamped Michael Myers mask from Rob Zombie's Halloween remakes. Since one of the conceits of the Scream movies is that the events get turned into in-universe movies - called "Stab" - perhaps this new film will have a bit about a Stab remake, in which the old mask has been given a gritty new makeover. That way it both lampoons recent trends in horror - as the original Scream was meant to do - and uses a new product that FunWorld would probably love to have advertised. Win-win!

This entry was posted in addendums, NECA and tagged Ghostface, Scream. Bookmark the permalink.