So in today's review of the Black Lantern Hal and White Lantern Sinestro exclusives, I briefly mentioned that getting the figures was nearly as bad as getting the five Hal Jordans from the year before. They did some things right, and some things wrong. 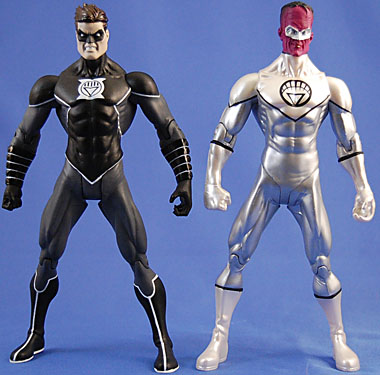 First, they released a lot more of the figures than last year and made them available at multiple conventions. However, they didn't really advertise that nor did they make more for SDCC, they just put out 2,000 per figure at each convention, which means while demand was not as manic, it certainly wasn't significantly slacked.

Second, they carried over the "stand in line for a chance to get a chance to buy the figures" - one of the big frustrations from last year. Because hey, you know what isn't aggravating? Going to a totally different area and floor than the sales booth to wait in a line to pull out a wrong-colored raffle ticket and get to do that all over.

So while a lot of the chaos was avoided this time around, everything that made last year suck was back, so yet again fans and Graphitti employees were exasperated, frustrated and grumpy. Essentially it's as though these companies are actively trying to not sell these products - low runs, complicated and defeatist method of purchase. Thankfully for them we're compulsive masochists.

Another thing this year had in common with last is that my complete set came down to the kindness of a fellow fan. After four passes we had only scored one winning ticket between my friend and I, so despite my wanting two Black Lantern Hals we decided it simply wasn't worth it so we agreed that since it was two figures per person she would get one set and I could have the other. So, down to Graphitti and into that 30-minute line, and you know what we found? Yes, it was two figures per person but since there are two figures you were only allowed one of each! Matteled again!

Well, it turns out that one of the two guys in front of us was on the fence about the figures and realized I wanted them more than he, and you know what? He gave me his set - how cool is that!? So once again by getting screwed by DCD/Graphitti I made a great fellow-fanboy connection. Here's to you randomly super cool guy - wherever you are! My collection is complete thanks to you!