In today's review of the Batman: Arkham Asylum Harley Quinn figure from DC Direct, I mentioned that she was wearing the warden's ID badge. It's a separate piece glued to her shirt, and it's been printed with the warden's photo and information. 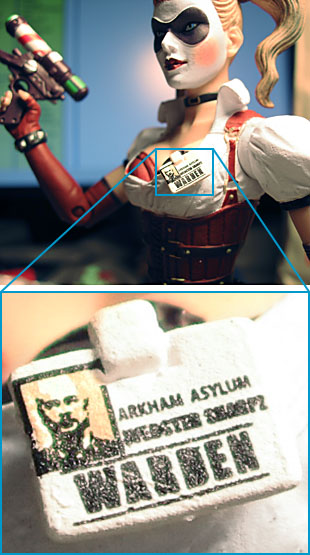 Nice work, isn't it? There are a few oddities worth mentioning, however. His name in the game is "Quincy Sharp," but the figure's badge identifies him as "Webster." Was that a working name for the character, or was someone in the art department trying to throw in a little Easter egg that none of the rest of us would get? Secondly, there's a Z on the end of his name - he's Warden Webster Sharpz. I thought it was an E at first (Webster Sharpe), but after taking this photo at a size large enough to ensure it was legible, it became apparent that no, that was a Z. Go figure.

P.S.: we're not going to share the full-sized image with you, but if you want a bigger shot of that picture of Harley, you can see her right here. Enjoy!

This entry was posted in addendums, DC, DC Direct and tagged Batman. Bookmark the permalink.