Rustin's Spoils of the Week #14

I really love looking at photos of people's collections, and a few years back I stumbled on a guy who collected only Wonder Woman figures and statues. And by gum, seeing so many iterations and variations on the same character in one place... well, that was just darn cool-looking, and something that never occurred to me before. It's a concept that stuck with me and ultimately has found an outlet in two character-based collections. Since I had a very slim-pickings week in haulage I thought I'd share one of those collections with you now - Aquaman. 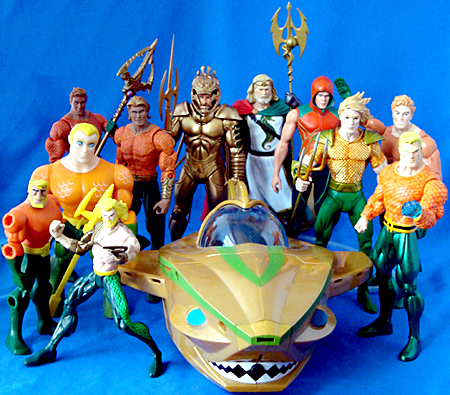 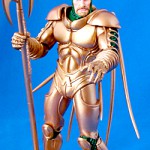 An interesting but short-lived idea was the Armory line and its one series. Presumably Aquaman wore this armor at some point, somewhere, but that doesn't affect its great sculpt. Lots of nice detailing and... well, armor-iness abound. The idea is he's wearing green chainmail under the gold armor, which is visible in certain areas. One of the highlights is the very cool Captain Nemo/League of Extraordinary Gentlemen/Kevin O'Neill style helmet. One of the low lights is the large volume of tendrils that attach to his back. I just don't get it. Each terminates in a ball which pops into a socket so there is some poseability, but it just makes getting them all to match angle and direction fairly hard. Accessories include an "Armory" logo stand (same mold as the Green Lantern bases) and the ubiquitous trident. This is one of my favorite Aquaman tridents for its simplicity and functionality. It is given a strip of fur or fin or whatnot, though, which sadly he can only hold it at one angle. 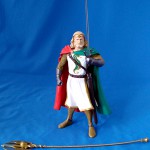 Oh Elseworlds... such a great line. I wish it would come back. The line is also the origin of yo's and my "friendship" and indeed I hated him for it. DC Direct used to have panels at SDCC and the one year yo went we were both in attendance when Georg Brewer announced they wanted to hear peoples' idea for lines and the one they liked the best would get a signed artist proof of the Jim Lee Superman Batman mini-statue. yo suggested Elseworlds before I could, won the statue, and I've been bitter ever since. Regardless, that line allowed DCD the chance to fill in some significant holes from the deceased Kingdom Come line (Go Kingdom Come!), such as ol' King Arthur here. Not much more to it that what you see. The whole Kingdom Come affair followed the art too closely, so Aquaman doesn't have a whole lot of pose options. The sculpt and paint are fantastic, but I've never liked the costume much at all. It's not a bad concept but... it's just not very Aquaman-y. He comes with two accessories, a big, cool trident with an octopus on the blade (I am a confessed cephlo-phile and thus adore this) and, surprisingly, the sword is removable from the scabbard! Articulation is at the Big Five plus the left hand wrist for holdin' powers. 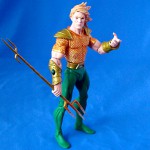 This mold was originally part of the mediocre First Appearance toyline, which ran out of worthwhile "First Appearance" characters after two series and, out of a need for line branding, continued in on to give us a potpourri of many of the "modern," short-lived mid '00s outfits, such as this - this is actually a repainted version released in Superman/Batman Series 7. Frankly I don't know much about this Aquaman - black eyes? Two flesh hands? Short sleeves? We accept it and move forward. The sculpt is pretty strong on an element-by-element basis but for some reason just it doesn't click for me on a whole (I think it's something to do with the coloring and the head). The shirt is the familiar scaled look, but a Tee and definitely on the yellower end of the spectrum rather than the classic orange. The gold armor bits are nice touches and the gauntlets indeed hide a surprise - ball-hinged wrists! Of course the gauntlets limit the range of motion but at least it is there. The biggest issue is that his holdin'-hand is made of hard plastic which took a lot of effort (and a Playmobil battle axe as leverage) to get the trident in between the fingers and thumb. Oh, I don't like the trident much at all either. Overall it's a decent figure, though, and definitely worth adding to the collection as the only collectible of this costume yet. 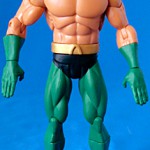 Oh man. What the hell was this line? Garbage from day one. I apologize to all those involved but these sculpts were just... not good, especially in comparison to DCD's standards; and seriously, the re-used part thing? How could they possibly think they could compete with Mattel on their turf? Ridiculous! Yeah, yeah, yeah, everyone loves Perez but if these figures are really based on his art, WTF? Okay, so... honestly this figure isn't as bad as all that but unless you have to have every Aquaman figure like me, you're fine without him. The head is the best part. The rest is just cartoonishly proportioned, undetailed generi-sculpt. Except for the hands, which are awkwardly posed, considerably more detailed (wrinkled) than the entirety of the figure and proportionally just too big. He comes with a pointless black oval base. Next. 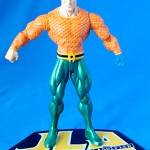 I really like this figure. The exact opposite of the History of the DCU figure, this is what an artist specific, re-used figure should be. Well, he's not reused in parts, everything is all new, but all of the Ed McGuiness figures are built off the same base body sculpt, which is just a-okay because A) that's how he draws and B) it gives a great continuity and cohesion to the entire line. The scaled shirt is definitely the highlight of this figure, especially with the sporadically darker hued scales to break it all up and provide texture. The metallic paint for the costume, especially the pants, is very eye catching and particularly cool is the translucent blue "water" hand (a short lived concept, but one I like the idea of, except of course... what happens when he's underwater?). I love this figure and highly recommend it! 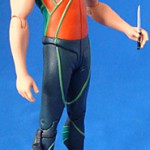 Smallville has never interested me much at all and as a result I've rarely (if ever) seen an episode, but that won't preclude me from adding this to my Aqua-army. This is the pseudo-wetsuit look of the character on the show and seems to have a pretty decent likeness from what I have seen. The detailing, i.e. line work, and paint is pretty darn good on the wetsuit. He has a little more articulation than normal with articulated ankles. That's probably either for swim or walk pose, since this wave was pretty much centered around the Resevoir Dogs-esque walking photo of Smallville's "Justice League" they would want to give you the option to recreate it. To that effect, Aquaman comes with interchangeable "up" and "down" hoods, though the "up" one is a little difficult to get around the removable head. We also have two accessories, a small black disc/stand and a tiny knife that can't really be held (it's balancing precariously in the photo and fell just moments after the photo was taken) but it does fit in the calf-sheath. A good figure for what it is but not something terribly special for non-fans of the show. 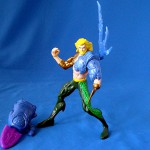 I can trace my interest in the DCU back to the Total Justice toyline. In the '80s and early '90s I got all my comic knowledge from cartoon shows and their tie-in toys. As a result I had a decent handle on Marvel through Spider-Man, X-Men and Iron Man and the subsequent ToyBiz product, but really my DC base was only Batman: The Animated Series and then some Super Powers figures (that figure birthed my "obsession" with Aquaman) so TJ was my introduction to the then-modern incarnations of classic characters. The thing that grabbed me about this line was the sculpting. Nothing looked like these figures before or since. They have a very stylized aesthetic in which all detail lines are thin and deep cuts, almost to the point of being impressive that they could even be removed from the molds. It's like the sculptural equivalent of Jim Lee's linework and it is awesome! Does anyone know who sculpted these? Arthur here has a fairly dynamic pose but with feet that far apart it's hard to keep him standing, especially with the accessories on. He comes with a giant, goofy missile launcher and removable bicep and shoulder armor, the latter with swivel-able crustacean spines not unlike Sauris from Galaxy Quest. The gimmick of the line was this removable "Fractal Tech Armor," so there you go. This figure is the variant: the normal had the pauldron-y shoulder/arm armor in the comic-accurate steel gray, while this is gold. He does have only the "Big 5" points of articulation (shoulders, hips and neck), but the sculpting makes up for that. Plus this is one of only three figures ever made depicting this costume. 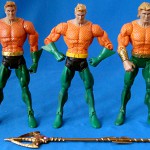 This is for all intents and purposes the definitive Aquaman figure. I'm honestly not crazy about the head but there's worse in this round-up. I just love the scaling on the shirt and the execution of the calf-fins. In every way this is a true successor to the Super Powers figure. Included here are two variants. The "Modern Costume" version was available as a chase with the original release and features a "modern" (worse) head with longer hair, fancy gold gauntlets and no black undies. Ooooooh - It's good to be the king! The other is a simple repaint from the TRU exclusive MotUC two-pack with "Comic Colors" Mer-Man. The changes are subtle and amount to a gold, rather than yellow, belt and mildly pearlescent drybrush on the shirt rather than the lighter orange of the original figure. The pearlescent shirt is really nice, but if I had to choose I'd stick with the original. Missing here are the ugly gold-shirt repaint from the Walmart two-pack that I refuse to buy and the dumb, blue "ocean" outfit which is so deep in my "not on display" box I forgot about it until right now. Whoops.

Mattel: Brave and the Bold - Aquaman 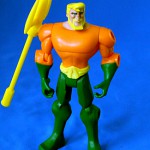 Another figure purchased mainly to pad out the collection. The gloves and calve-fins require the legs and arms to be all-new tools but you'd barely notice with all those god-awful holes on the limbs. It's no wonder this line didn't last too long. It's a cute gimmick but these are just ugly figures as a result. Aquaman comes with his trident, which does of course have a hexagonal peg so that it and plug into any number of the holes... what fun. What terrible, terrible fun... The worst part is the head though. It's just pure Kricfalusi and belongs in Ren & Stimpy. I've still never seen the show, but hear it's pretty great. 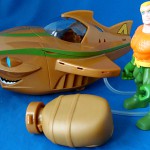 From the "we're not copying exactly what others have done with Marvel" Superfriends kid-aimed line comes this surprisingly cool set. The figure is pretty much exactly like the old ToyBiz figures but has a balljointed head, which is pretty cool. I like the reference to the shirt scales by sporadic white paint detailing. It's a nice allusion for this style. The sub is a really cool design, basically an exaggerated gold shark. Of course Aquaman needs a submarine as bad as Super Powers Superman needed a jet, but what are ya gonna do? There's a hose that runs out to a rubber squeeze pump which allows the sub to squirt water at Moms and Sisters.

This entry was posted in DC Direct, Kenner, Mattel, Rustin's Spoils of the Week and tagged Aquaman. Bookmark the permalink.

12 Responses to Rustin's Spoils of the Week #14