No, we're not talking about what rich a-holes call the "death tax"; this is something more specifically about toys.

A couple weeks ago, ex-wrestler Randy Savage died. Since then, his toys disappeared from shelves and prices jumped on the secondary market. It happens whenever a celebrity dies: for a period of time afterwards, demand for their toys increases. And it's even worse when they have a new toy that's just come out recently - people go nuts! 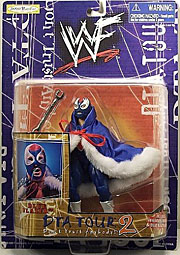 died during a pay-per-view event in 1999. A "Blue Blazer" figure was included in Jakks Pacific's WWF "DTA Tour 2" line around the same time, but it was already shortpacked; his death drove up interest (from people looking to make a buck, mainly), leading to the figure becoming incredibly hard to find. ToyFare even had to quash the rumor that the toy had been pulled from cases.

A similar thing famously happened with the Heath Ledger Joker figures, and now it's happening with Randy Savage. There had been a Macho Man waiting on the pegs at my Walmart for weeks before his death - it was gone the next day, and I still haven't been able to find a second.

Interestingly, this doesn't happen with all deaths: there was a Chris Benoit figure released shortly before his death in 2007, but the unfortunate circumstances around that meant that there was no real bump in the figure's popularity: the period between when the public learned he was dead and when we learned what had happened was too short (not that it stopped every eBay listing posted on that day from trying to cash in on it - it's just that the buyers didn't bite).

So, when a real person dies and the action figure based on them suddenly jumps up in price? If you want the toy, you've got to be ready to pay the death tax.

This entry was posted in Geek Speak, Jakks and tagged Batman, ToyFare, wrestling. Bookmark the permalink.