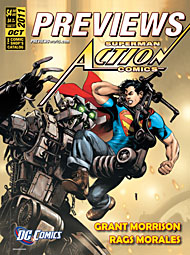 It's time once again to thumb through the toy section of this month's Previews, and see what goodies we can uncover. Scheduled to start shipping in December.

The first listing is on page 137: Arkham City Series 1 has Harley Quinn, Robin and unmasked Batman. Due December 21.

The Just-Us League of Stupid Heroes is back, this time with Alfred E. Neuman as Superman, Aquaman and Green Arrow. Due April 4.

IDW is apparently having a "photo-cover month," as seen on pages 142/3 with the Transformers comics and pages 144-6 with GI Joe. All the books have variant covers with pictures of the actual toys.

If you've missed either of the Incredible Change-Bots books, they're relisted on page 320.

Calico Jack's Pirate Raiders is getting a box set featuring four new figures: a good pirate, an evil pirate, a Naval officer and a skeleton. See them on page 368.

Page 372 offers a new series of GI Joe figures. The picture is old, but the listing includes Tunnel Rat, Ripcord, Scarlett, Renegades Storm Shadow and a techno Viper, many of which haven't even been announced yet.

Worried that the unreleased Green Lantern Movie Masters will never see the light of day? Well then why not pay $22 apiece for Sinestro and Hal! Page 374, if you're a sucker.

You know those Lego-knockoff Doctor Who figures? There's a TARDIS controlroom set coming. It's on page 400.