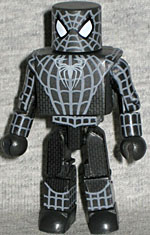 Remember when we complained that the Spider-Man 3 Minimates were running late? That was in September 2007, and it was December before they showed up. Naturally, there were lots of Spider-Mans, including this pseudo-Venom. Sure, they may call him Black-Suited Spider-Man, but with that big Powerhouse chest, he looks less like hero Spidey and more like villain Spidey. His body is dark grey, and the weblines are just a bit lighter. And though it's very hard to make out (unless you're taking pictures and can zoom way in) the "plain" areas of his costume are actually painted with a tiny texture pattern - and yes, it goes all the way around, which must have cost a fortune! 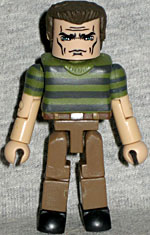 Spidey is paired in this set with Sandman, no stranger to Minimates himself. Like Spider-Man, he has a larger-than-average chest, though in this case it's because they decided to give him a sculpted shirt. An odd choice, no question, but it works. His stripes are painted on, and they match between his shirt and sleeves. His belt is sculpted as part of the shirt, and there's a neat little attention to detail in the back, where the shirt hangs over the belt slightly because it came untucked. What a thing to think of! The likeness of Thomas Haden Church is good, so at last you can start on your Wings Minimate customs. He also gets a new hair piece, but it sticks up a little farther in the front than it should.

Sandman comes with the set's only accessories, a pair of interchangeable arms. The right arm increases in size until you get to a fist the size of a Minimate torso, while the left arm is bent at the elbow and terminates in a big, square hammer. The "sandy" limbs have a pitted texture, so it's clear they're not just flesh (even without the benefit of their yellow paint).

Spider-Man is no great shakes, but Sandman's accessories are cool and he's close enough to the comic version to fit your collection even if you're not into movie toys.