The mutant Fantomex is a hybrid of man and machine, a technorganic 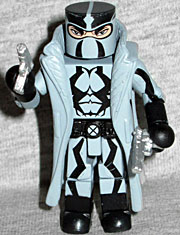 sentinel with an external nervous system and multiple brains designed to police the world's mutant population. Striking out on his own, he became a self-styled thief and solo operator before reluctantly joining up with the mutant black ops team known as X-Force.

This Fantomex Minimate is clearly meant to complete (or at least complement) the Uncanny X-Force box set, since he's wearing his gray costume with the jagged black stripes, rather than his plain white one (so this Minimate is already doing better than the Marvel Legend). His costume details are only painted on the front, because the rest would be hidden beneath his coat. He's got a pouchy belt and two silver pistols, and his mask is just painted on a normal head, rather than being a separate piece.

The man who bears the name Martin Li lives two lives: one as the 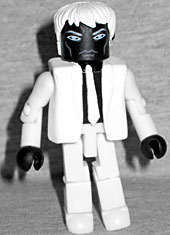 kind-hearted operator of a soup kitchen, the other as a ruthless crimelord in New York's Chinatown. And where Li has the ability to heal, Mr. Negative has the ability to corrupt people, including Spider-Man, as well as charge his weapons with dark energy.

Mr. Negative's abilities are the result of the same drug experiments that created Cloak and Dagger. Like Menace and Anti-Venom, he's another "Brand New Day" character who could just as easily have been fighting a married Spider-Man. His design is really cool, and the Minimate executes it well. There's even gray detailing on his face, so you can see more than just his white eyes and eyebrows. 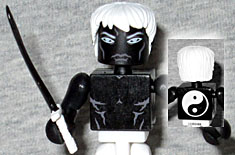 The set includes a negative-energy sword for him (meaning it has a black blade and a white handle), as well as a pair of black arms. You can then remove his coat and necktie to give him a "shirtless" look - they gave him a few muscular details on his chest and a large ying yang symbol on his back to complete the look.

Pairing these two characters doesn't really make any sense: other than being colorless, the two have nothing in common. They're both decent figures though, so ultimately that doesn't much matter. My only question now is whether I put them in the X-Men or Spider-Man bin when it's time for storage.