Spider-Man: Into the Spider-Verse Miles Morales and Spider-Gwen two-pack review

It's been a week since Into the Spider-Verse opened, and while we won't be getting into spoilers today, I think we can all agree the film is fantastic. However, when it comes to toys, things are rather lacking.

While there are a few action figures available, they're only in the slightly-small "kids" line. If you want something you could integrate with your Marvel Legends collection, the only option is this two-pack available exclusively at Target stores: 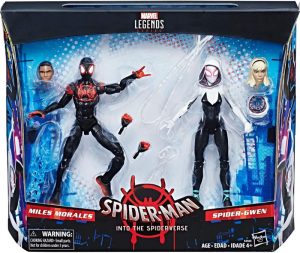 We won't be reviewing this pair, because neither figure warrants it. Here: it's this Miles Morales and this Spider-Gwen, with minorly different paint. Review over.

Do you notice what's wrong, though? Look at both figures' heads: they're the comic versions, quite clearly.

How long has this movie been in development? How long did it take to animate? Could Hasbro have not at least spent a little money creating heads that were distinctly based on the characters' cartoon appearance? Keep everything the same, but give us Miles' puffy hair, and Gwen's side-shave.

Into the Spider-Verse is outstanding, but this two-pack still seems to be something of a slow seller, probably because it's two glorified re-releases. Even a simple change of heads would have helped immensely.