Last Friday, with little fanfare, the Spawn Message Board shut down permanently. While not wholly surprising it is still a significant personal loss to some of us here at OAFE. 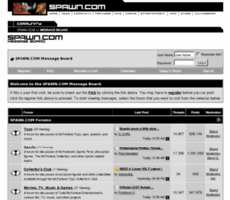 Back in the late '90s the internet was still relatively new, AOL was just starting to lose its dominance and many were still trying to figure out what this new thing called "the web" really was. Fortunately, the folks at McFarlane Toys had the idea of adding a message board to their fledgling site, which in turn was one of the first toy-related sites online and as such drew a lot of us collectors like moths to flame.

The Spawn Message Board is essentially the birthplace of the online toy community. It's the first place we could not only meet and interact with one another from all around the world, it was the first place we could do so with people from the actual company! Chet Jacques and Steve Hamaday (particularly the latter due to the "Steve the Victim" figure) were are regular conduits of news and tidbits with occasional visits by Terry Fitzgerald and even Todd the God too. It was just an incredible bonding experience and it's where I first "met" yo go re, Poe Ghostal and Shocka years before being invited to join them here.

Over the years, fan sites have taken up the mantle of community and while a few companies still offer boards, the non-corporately-affiliated ones remain the most popular. Add to that the shocking nose-dive of product that McFarlane has released and isn't surprising the boards were no longer the draw they once were. I'd still go by every couple weeks to look at haul threads, collection photos and get caught up on the goings on with Revoltech. And I guess that's why they were ready to cut the boards, when many of the threads are about other companies' product what can they do?

The Spawn Boards will always have an intensely personal and important nostalgia for me and it is sad to see them go. To be overly sentimental, they remind me of a simpler, happier time. In fact, to this day when I think of the Spawn Board the image that come to mind is the original board, with its bad brick graphical background and neon green text. The board and what it represented will be sorely missed, at least symbolically.

Todd announced the closing with a post on the boards the week before they went down, see text below:

Hey Folks! It's been a while since I've written something official for these boards, although I have been dropping by frequently over the years; reading lots your terrific posts/threads. Today, I wanted to take an opportunity to thank all of you for your support of the many items my companies have put. Every day I am thankful when any of you decides to spend your hard earned cash on any of our products. Because every business knows it can only succeed with a strong and loyal fan base.

The second reason for this post is to announce some news. As some of you might remember, back when we started the Spawn Boards, social media wasn't nearly the giant force it is today. And while we continue to have a very active, but small community on these boards, we feel that there are better ways to provide social outlets for our fans in a wider arena.

With that in mind, we've decided that as of Friday, October 14, the Spawn message boards will permanently be removed from the spawn.com website. Besides announcing this news, we also wanted to allow this transition enough time for everyone to collect any contact info they might need before the boards are officially taken down.

As we make this transition with our fan base, I want to personally invite you all to join us as we move the party over to our new social sites on Facebook, YouTube and Twitter. We feel these sites will provide a better way to serve our community and loyal followers with more unique daily content including news, "first look" photos, videos, and contests. So you can still get your McFarlane fix!

We all know the importance and impact that the Spawn message board has had over the years and I too like hanging around here (heck, it's where our initial conversations all started). So, my hope, is that you will see this in the same light as I do, which is a natural transition to some of these other social outlets. We are not abandoning you or going out of business or any other silly negative reaction that might come to mind. It is simply making some business moves that will strengthen what we are able to deliver to you on a daily basis, while at the same time continuing to deliver the same great products you have come to expect from my companies.

I sincerely hope that all of you will stick with us through this transition and continue to provide your very valuable feedback through our other social outlets.

Thanks again for all of your support through the years. See you at the new party site!

This entry was posted in commentary, McFarlane, news. Bookmark the permalink.

14 Responses to R.I.P. Spawn Message Board