Rustin's Spoils of the Week #36

This was a lite week for me, but it did yield some highly anticipated Minimates! 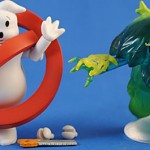 The Logo Ghost is something I've been hoping they'd do since the beginning and I'm so glad they finally got to him as he looks great in the Minimate style! He has one major drawback, though - the red "no" symbol does not attach to his body in any way. As a result it always slides down to an odd angle. Fortunately you can effectively pin it in place by posing the arms and hands to their respective corners but it's not quite the iconic pose one would hope for. However, there is a lot of good! The head, torso, hands and feet are all new sculpts and capture the look perfectly. What's more, he comes with an alternate head piece (it slips on over the Minimate head), alternate standard hands and a saw! Presumably the idea here is for him to try to cut his way out of the "no" symbol which is pretty darn fun! Despite the slipping symbol this is the star of Series 2! Killerwatt comes from the episode "Killerwatt" and uses an all new head/torso piece over a standard Minimate head, torso and arms with the longer "claw" hands from the movie series' Theater Ghost. The success of this figure really comes from the translucent plastic, but be forewarned, he's so large that his "hover stand" got warped in the package. Killerwatt also comes with two electro-energy things that kind of fit over his arms! 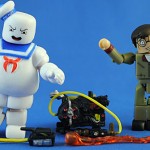 Much like the Janine & Slimer set from Series 1 this offers us alternate decos of the non-Ghostbuster characters from the second boxset. Louis comes in Ghostbuster uniform complete with pack-less deco under the torso piece. I can't express enough how much I love that they're doing this - all Minimates need this! Stay-Puft comes with angry expression and unlike the movie versions is painted white, not just cast in white plastic. This gives him a much more vivid hue which is great, but the lines for the other colors are far less exact than on the previous versions. Also, unlike Slimer he comes with no accessories though Louis has a removable closed ghost trap, an open ghost trap and a removable Proton Stream. It's really, really a bummer that they didn't pack Louis with the Logo Ghost (or at least give Stay-Puft some kind of alternate look) because had both figures come with alternate looks I'd most certainly be buying two of this set! 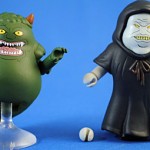 The other ghost two-pack offers some cool figures to haunt up the 'busters. The Sandman is a creepy looking dude with a large, new head/torso piece (which is righteously hard to remove from the Minimate figure, if you ever wanted to do so) which does a good job of capturing the look of the character. He comes holding his blowgun for shooting Sleep-Dust at his hapless victims. He appeared in three episodes, the first of which also featured Janine in her Pink Ghostbuster outfit. Evil Slimer comes from "The Two Faces of Slimer" and is more commonly known as "Big Green." He basically looks nothing like Slimer, but that's okay as any new ghost is a welcome addition. Like most of the ghosts he's a new head/torso piece over a waist-up Minimate. The sculpt is pretty solid with a bit of vertebrae sculpt as well the trademark bumpy head and brown horns. 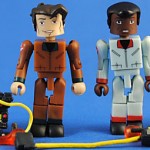 Like Louis & Staypuft, these two come in the second Real Ghostbusters boxset and are identical to those figures. This is awesome because like all other Ghostbusters in this series they come with pack-less decos under their torso pieces so it's totally worth it to have seconds (even thirds if you want a set shooting Proton Streams)! Like Stay-Puft, Winston has rougher paint apps, I guess the factory just has some issue with lighter colors. This set comes with 2 closed ghost traps that fit onto the proton packs, two Proton Streams and one open ghost trap. 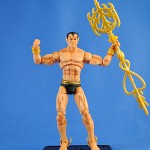 This is the third toy of Namor in the line but the first Speedo version single carded, an earlier version being released in a Golden Age Invaders box set at SDCC '09. This figure offers an all new sculpt which is very muscle-y! No doubt intended as a base for future superhero figures we'll just have to live with Steroid Namor for the time being. Fortunately he has equally detailed trunks, which is to say fully sculpted scales - pretty cool! Like most of the new Marvel Universe figures he gets the swivel ankle with rocker foot joints for better posing as well as the super awesome balljoint-on-swivel neck joint! Namor comes with the standard Marvel Base (in one of two variants - it either says "Sub-Mariner" or "Imperious Rex") as well as a hyper gaudy trident. I guess it's better than nothing. 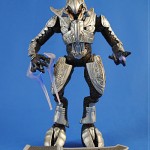 McFarlane, once herald of action figure excellence, celebrates Halo's 10th anniversary with a line that basically just dips into the wide pool of existing figures and offers one new sculpt amidst a handful of repaints. This Arbiter hails from Halo 2 and is a silver repaint of the figure from Halo 3 Series 2 (which was only in 2008 - it seems like the line is much older than 3 years!). I dig the medieval armor look of this guy so I bought it and discovered it to be a decent addition to the collection. I was hoping for a companion to the Arbiter Ripa 'Moramee from Series 8 but this is a much brighter shade of silver and about a quarter inch shorter than Ripa. Oh well. Chock full of articulation that doesn't have much range it comes with the Arbiter Prong-Gun-Thing and the pointless purple grenade that's too small to hold with too big a hole to fit on a peg. Hey, "it's an attitude." Old Todd is jumping on the Build-a-Figure bandwagon, so this guy comes with one of the large swords for constructing the pretty cool "Difficulty Plaque." Like most Halo figures (and McFarlane product in general, really) I like the figure when I'm not holding it. It looks fine on the shelf but underwhelms when played with. And would it kill them to give these things peg-holes on their feet!? 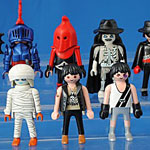 Last weekend we did a special post for Spoils where I basically hijacked this format for reviewing the 12 figures from the Boys wave of Playmobil blind-bagged figures. If you haven't already, check it out by clicking the link above! Overall is an okay start to the line. They're clearly ripping off Lego's idea and doing a mediocre job of it. There is no real "must-have" figure in the wave, and while there are a couple cool ones there are just as many that are terrible. The format makes a lot of sense and because these have the same price point as the Lego Mini-Figures you get a lot more for your money, but the lackluster design work on these may deter most people and kill the line before Playmobil can really figure out how to do things right.

5 Responses to Rustin's Spoils of the Week #36