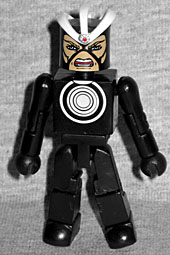 blasts and later joined the X-Men despite his occasionally stressful relationships with Cyclops and Iceman.

Havok is seen here in his classic costume - the one that was given to him by Larry Task (son of Bolivar Trask) to allow Alex to regulate his powers. Man, how many of the X-Men owe their costumes to villains, anyway? Havok's suit is all-black, but with concentric white circles on his chest that grow to display his power levels. The other side of his chest has the same circles, but they're going wild, to show he's either overpowered or firing his blast. The head has that distinctive three-pronged headgear glued in place, and his face is delightfully intense.

Hey, speaking of people who got their costumes from villains... 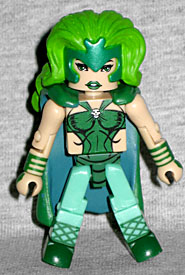 The estranged daughter of Magneto, Lorna Dane's magnetic powers were lost after M-Day but were restored during her tenure as one of Apocalypse's Horsemen.

Lorna met the X-Men when a mental summons from the mutant Mesmero brought her to San Francisco. Mesmero was working for (a robot duplicate of) Magneto, who strapped her in a "mutant energy stimulator" to unlock her powers, then gave her this costume. It has a tiara (shaped a bit like Magneto's helmet) to hold back her hair, a '60s-style swimsuit with cutouts in the sides, a skull clasp and strappy shoes and gloves. She uses C3 Superman's cape, and has a new hair piece (naturally).

Havok and Polaris have always seemed like "hangers on" in X-History. They're not part of the original team, but they're also not part of the all-new, all-different team. They were best used in the mid-90s X-Factor book, but those costumes aren't as iconic as these are.