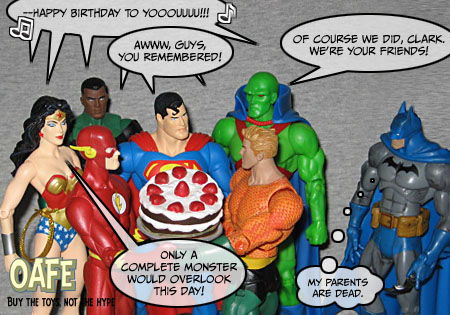 All: (singing) --happy birthday to yooouuuu!!!
Superman: Awww, guys, you remembered!
Martian Manhunter: Of course we did, Clark. We're your friends!
Wonder Woman: Only a complete monster would overlook this day!
Batman: (thinking) My parents are dead.

Anyway, today is also Wednesday - aka "New Comics Day." So for the first time in 28 years, Clark's birthday falls on New Comics Day (not that new comics day was on Wednesday three decades ago, but we're we're simplifying in order to make a point). DC should have put out a press release, or had some sort of in-store events to draw attention to comicbooks today. Even if it was something as simple as a birthday card on their site that fans could "sign." Something, anything to mark the occasion. This was a chance to have some playful fun with a beloved character, and they missed it.

For the record, today is the 19th Leap Day since Superman's introduction in 1938 - which means that in eight years, Superman will be legal to drink. This is the third time Leap Day has been on a Wednesday since then too: 2012, 1984, 1956.

Wonder Woman's line about not forgetting is a dig at DC's indifference. Batman's private thoughts are a nod to the popular meme: 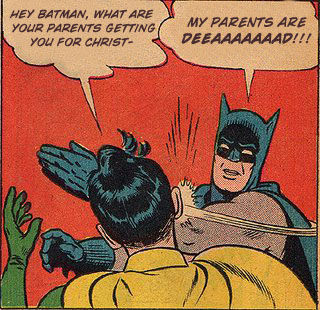 This version of the League is made up of both DC Direct and DCU Classics figures, because hard as it is to believe, DCD still has a lot of the best versions of characters. Mattel's Wonder Woman was disappointing, their Superman is mediocre, and they still haven't even made The Flash yet. Why was John Stewart invited to the party instead of Hal? You know why.

Notice that Aquaman is doing the superheroine "tits and ass" pose while he and Flash present the cake. What's up with that, Aq?