Toys are not citizens in Russia

...at least according to this story from The Guardian. 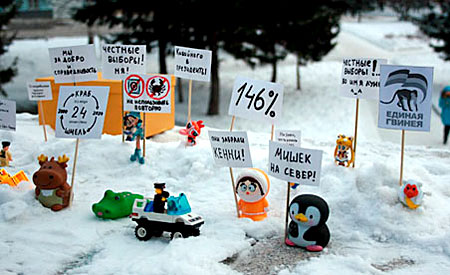 Last month, activists who had been denied permission for a public protest found a clever way to skirt the ban: they sent their toys out in their place.

Russian police don't take kindly to opposition protesters - even if they're 5cm high and made of plastic.

Police in the Siberian city of Barnaul have asked prosecutors to investigate the legality of a recent protest that saw dozens of small dolls - teddy bears, Lego men, South Park figurines - arranged to mimic a protest, complete with signs reading: "I'm for clean elections" and "A thief should sit in jail, not in the Kremlin".

The protestors object to recent parliamentary election results and to the fact that it seems like Vladimir Putin is going to win the presidential election again next month. But Federal Law No.54-FZ (passed in 2004) says that any assembly involving more than one person has to notify the government a few days in advance. Now technically the authorities have no right to prohibit an assembly unless it the participants are in danger or it's happening somewhere hazardous or important, but clearly if these protestors were being denied, the government was either using some loophole or broke the law. So the people had to get creative.

But now, the local government has decreed that the toys can't protest.

"As you understand, toys, especially imported toys, are not only not citizens of Russia but they are not even people," Andrei Lyapunov, a spokesman for Barnaul, told local media.

The number of people, and their toys, wanting to take part has risen dramatically since then.

"It probably wouldn't be that popular if the reaction of the authorities hadn't been so harsh and absurd," said the activist Lyudmila Alexandrovna.

Authorities though are not willing to back down.

"It is possible that the people who have applied are inspired by their toys ... and consider them their friends but the law unfortunately has a different point of view," said Lyapunov. "Neither toys nor, for example, flags, plates or domestic appliances can take part in a meeting."

The group said it plans to look for another way to protest - perhaps, since only assemblies involving more than one person need to inform the government ahead of time, they'll put one toy out there with a sign, and have the others watching from a distance.

You can see a slideshow of the toy protest here.

1 Response to Toys are not citizens in Russia