Pepper Potts was introduced only six months after Tony Stark himself,

and was immediately caught in a love triangle between Tony and Happy Hogan. She chose Happy a few years later, and was written out of the comic for decades. She came back to the book in the late '90s, but was still with Happy - it wasn't until after the movie that it was decided she and Tony were meant to be. This figure sort of depicts her as she was seen in the airplane hangar when Tony came back from the desert: she's wearing a dark pinstriped suit over a low-cut black shirt, and has a thin necklace. So why is she only "sort of" right? Because of the hair. Okay, it's blonde instead of red, but that was true in the movie, too. No, the problem is that instead of being pulled up into a loose bun as it should be, it hangs down her back. If you care about a movie-accurate look, you're out of luck. 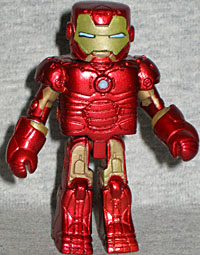 Minimates Series 21 came out in October 2008, well after the film had been in theaters, but only shortly after the DVD. This is the Mark III armor, the final product (in the first film, anyway). The helmet, chest cap, gloves and the entire legs are new molds - molds shared with the Mark II armor, but new nonetheless. There's actually quite a bit of sculpted detail. Maybe even too much. These are Minimates, not real figures: it's okay to just do the costume using clever paint apps. There are two holes in his back that serve no real purpose - at least, not on this figure. [Oooh, mysterious hook for a future review! --ed.]

One feature that wouldn't work if it were just painted on, however, is the removable faceplate on the mask. The face plugs into two small holes on the forehead, and actually stays in place fairly well. The amount of face that can be seen when the mask is off is good, too: neither too much nor too little. In fact, it looks a little like the HUD scenes in the film. 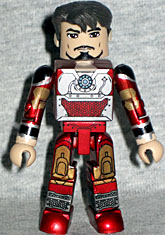 You can remove the armor to reveal... something. I guess it's supposed to be the armor's under-sheath, but since we never really see that in the movie it's hard to tell. The paint apps are easily the most complex we've ever seen on a Minimate. The major color is still metallic red with gold on the legs, but we also add large silver panels on the chest and back, and black accents on the shoulders and forearms. There are rivets, wires and metallic meshes visible on the body, and you can even see his Arc reactor. The set includes extra hands for this mode, and a new hairpiece. This really is a very impressive, very unique look.

Simply by virtue of having the "real" Iron Man armor, this is clearly the "main" set of Series 21, so Art Asylum could have cut corners and it still would have sold. Instead, they went above and beyond, creating something cooler than expected.