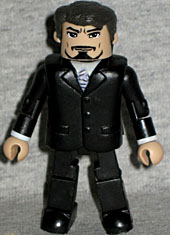 The first figure in this set is Tony Stark. Not "Tony Stark with armor," not "unmasked Tony Stark," just civilian Tony Stark. Judging by his necktie, it appears to be taken from the end of the film - call him "Press Conference Tony Stark" if you must, or "I am Iron Man" Tony Stark. It's a Minimate of Robert Downey Jr, wearing a suit and not having any hint of anything Iron Man-y. The jacket and tie are molded together as a new chest cap, while the rest of him is just plain black Minimate body. There are paint apps on the wrists to suggest the sleeves of his shirt, and the hair is new. Great likeness, too! 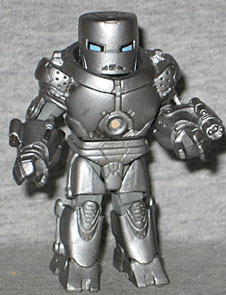 One of the best things about Iron Man is the way its art direction reveals its characters. For example, consider the Mark I armor: Tony Stark and Obadiah Stane both started from that same place, and decided to make a more powerful improvement; Tony made his smaller, sleeker and more flashy; Stane just made it bigger. It speaks beautifully to their different personalities and level of talent. This Minimate isn't as big as it would have to be to be in scale with human Minimates, but it is larger than average. The armor is made from nine pieces, and they're all detailed very well, from the pistons on his shoulders to the additional braces on his feet. They have a lot of bulk, making him look even more huge than he already is, and there's plenty of weaponry sculpted on the gloves. 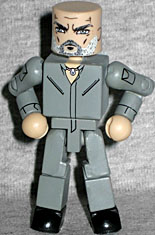 If you strip off the boots, gloves, chest cap, crotchplate and thigh armor, you're left with a (nearly) complete Obadiah Stane figure beneath it! The guy's never had an action figure before, so let's have a big hand for this first-timer. He's wearing a grey jumpsuit with simple paint detailing on the arms and torso, and they even painted his necklace on - nice attention to detail! The head is pure Jeff Bridges, helped by the distinctive bald/beard combo. While the set does include new feet for him, so he doesn't have to wear the Iron Monger boots all day, it doesn't include any hands. Whoops? Oh well, you're sure to have extras available when you want him to be human, and that armor had to be expensive.

It's cool to get a civilian Tony Stark, but it's still Iron Monger that sells this set. He's super cool, and the fact that there's an Obadiah Stane included - even one without hands - is just icing. 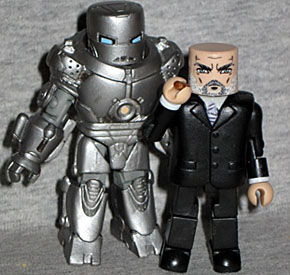