Captured by a terrorist group in a war-torn region, billionaire 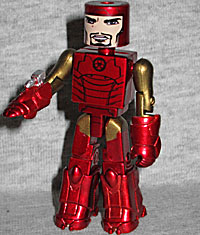 industrialist Tony Stark created a battle suit to help him escape. Afterwards, he improved the battle suit to become Iron Man, and has dedicated himself to protecting the peace since.

This is the figure that was prepainted as Stealth Iron Man, so it's the same kitbash of existing armor pieces: shoulder pads from Iron Patriot, helmet from Neo-Classic, gloves (plain hands and pointy ones) and boots from Extremis. It's a really nice look, honestly - especially when you consider that the MvC3 armor is supposed to be the Extremis, and the normal Extremis toy didn't look anywhere near this good. The fishlips design of Tony's face is weird, though.

We do get the world's coolest accessory, though. To the uninitiated, 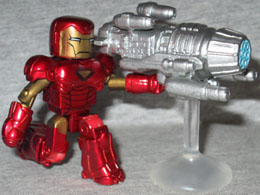 it's just a silver rocket or something. To everyone else, it's clearly the proton cannon, which has been in games since 1995's Marvel Super Heroes (but it [like the rocket he flies into the stage on] is based on a piece of tech seen in 1993's Iron Man #294, which means it was probably designed by Kevin Hopgood). It's so big that it gets its own support stand, but unfortunately having the Extremis boots means IM is too tall to tuck his shoulder beneath the weapon like he should. Still awesome! 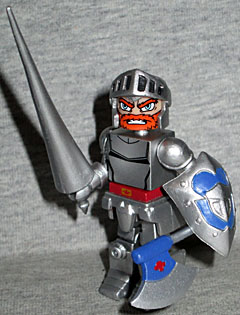 A legendary knight who jumped into the demon world to save his princess Arthur is best known for his dauntless courage in the face of terrifying monsters and life-threatening traps. Though he looks like an old man, he's really only 28 years old.

The star of Ghosts 'n Goblins is seen here in his silver armor. He gets new boots, a new waist piece (with a belt and built-in codpiece), bands on his forearms to suggest gauntlets, new upper arms with pauldrons molded on, and a new knightly helmet. He has big cartoony eyes, and a bushy red beard. He's armed with his lance, axe and shield. The set also includes a clear disc stand, but it only fits Arthur's foot, not Iron Man's.