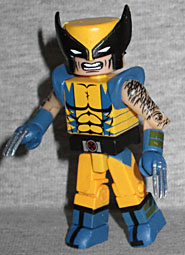 With his mutant healing factor and adamantium claws, Wolverine is the best there is at what he does... but what he does best isn't very nice. Beneath his gruff and crude exterior lies a noble spirit who genuinely treasures his comrades. However, in the face of his enemies he is merciless.

Wolverine. #38. Astonishing X-Men costume. Weirdly, he has a removable mask, but no hair to replace it. That's odd, huh? He has lots of hair painted on his arms, and the stripes on his ribs go all the way around the sides of the figure. 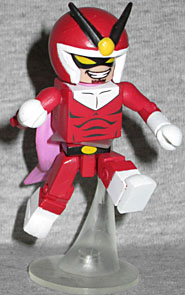 Before becoming Viewtiful Joe, Joe was just a 17-year-old who loved the movies. His girlfriend Silvia often became angry over his immature ways, but when she was dragged into the world of the movies, Joe pursued her with his newly gained VFX Power, which gives him abilities similar to camera effects.

Viewtiful Joe is a tokusatsu-style character, which explains his huge helmet and long, flowing scarf-cape. He's meant to be a very small guy, mainly thanks to the games' superdeformed style, so they gave the Minimate the slipper feet to keep him short. The set includes one of those flight stands that fits into the figure's waist, but his scarf-cape gets in the way of it, pretty much making it useless.