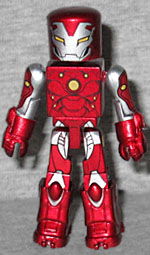 Tony Stark's personal assistant, Pepper Potts, was given an arc reactor after a terrorist attack lodged shrapnel near her heart. Once she had recovered, Tony gave her a suit of armor that was powered by the same reactor.

Yes he did, which means this isn't "Rescue Armor Iron Man," and is instead just "Rescue." That's her supranym. Her suit is red and silver, with the details tampographed on. The face of the armor looks sort of feline, thanks to the shape of the eyes and mouth, and the body of the suit has small yellow ports on the chest and back, because that's the way Tony was designing things at the time. The Minimate gets sculpted boots and gloves, but the boots add an almost comical amount of height to the figure.

The helmet is a separate piece, allowing you to remove it. And hint, it's sure not Tony Stark's face you'll see underneath. Pepper has a rather neutral expression ("determined," if you're feeling generous) and has her cute little freckles painted on her cheeks. The set includes a red-haired ponytail piece, and a yellow flight stand. 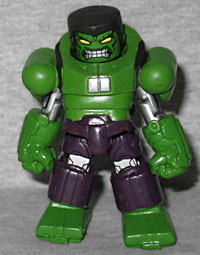 The Soviet scientist called "The Gremlin" is an expert in gamma radiation as well as robotics, and has often clashed with the Hulk and Iron Man. Now, he has combined his strengths to create his latest invention: Robot Hulk!

Oh wow, what fun! This Minimate is based on ToyBiz's Mecha-Hulk figure! The design is different, but the intention is clear. He's green and purple, like a Hulk should be, and has a big growl on his robotic face. Despite being made from all reused pieces (Sentinel armor, Hulkbuster hands, and Colossus' metal hair), the final product looks unique.

And there's still more here! If you strip off all the extra pieces, you'll eventually 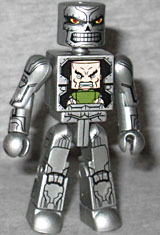 get down to the plain, core robot. The set includes extra hands and feet, as well as a replacement hip block and a silver skeletal head, because they really want you to have a complete robot (although, if you don't change the hands, it makes him look like he's wearing Hulk Hands, which is just funny).

Sadly, the set doesn't include a small, separate figure of the Gremlin, like ToyBiz's did - they totally could have done him like Snarf or the Ro-Bear Berbils, right? Instead, they took a cue from STRIPE and painted a Minimate-ized version of the character piloting the suit. Again, this is so cool!

Everything about this set is awesome. Pepper in her Rescue armor, a toy-homage Hulk, a hidden character under the armor... there's nothing bad about any of it!