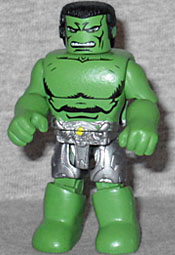 huge amounts of it during a military weapons test. Now, when his emotions reach a boiling point, he transforms into the green-skinned Hulk!

Series 16 of the TRU-exclusive Marvel Minimates, in addition to not adequately identifying its exclusives (example: this set doesn't get the silver sticker, even though it's not available anywhere else), is mostly about the Marvel NOW! storylines, so this Hulk is wearing armor. Not the full suit he normally wore, but the "shorts only" version from the cover of Indestructible Hulk #1. That means his thigh armor, waist cap, and chest cap are all new molds, sculpted with lumpy Banner-tech. If they wanted his hair to look like it had been shaved, though, they should have just painted on stubble, not given him a 3D piece. And why are his feet green boots instead of, you know, "feet"?

The set includes an accessory for Hulk, too: it's R.O.B., the Recording Observation

Bot created by SHIELD to monitor Hulk while he was working with them. Basically it kept track of his actions and emotional state, and has a digital screen on the front that allow it to display basic emotions. The fact that we got ROB here really (with a flight stand to peg him onto) underscores the fact that the Excalibur box set should have come with a Widget.

After building a high tech suit of armor to escape his kidnappers, 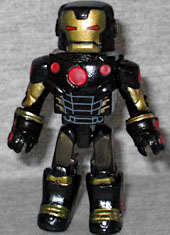 billionaire industrialist Tony Stark improved on his designs to become a costumed hero, teaming up with other heroes to form the Avengers.

Iron Man's Marvel NOW! comic was drawn by Greg Land, so Iron Man's Marvel NOW! armor pretty much looked exactly like his movie armor (because how else was he supposed to trace it?). Surprisingly, none of this toy's pieces are reused - that means a new helmet, half-chest cap, upper arms, gloves, and... oh wait, his boots come from the Mark VII. Our mistake! The face and chest are fully painted, if you choose to remove the add-ons, and he comes with a pinkish-orange exhaust stand.