Today, I reviewed the Star Wars Vintage Collection Darth Maul, and it's a really cool figure. However, it's undeniably a modern figure - they can put it on whatever kind of card they want, it's still clearly designed and modeled like any other current toy. But one of our readers (the same guy who pointed out that Teemto Pagalies was basically The Noid) had a different idea:

Why not take modern characters like Darth Maul, the ones that are really iconic from the prequels, and sculpt them in the old style? That may sound stupid, but think about it: Hasbro already produced one figure with a newly created "old" sculpt - Rocket Firing Boba Fett - so we know they're capable of doing it. And a lot of fans restrict their collections to the old toys because there's a limited number of figures available, and they don't have to deal with the constant double-dipping the rest of us do. So we're not saying turn, I don't know, Sio Bibble and Ric Olie into minimally articulated, retro-style figures, but a few select characters, released as mailaway exclusives or something? Tell us that wouldn't be cool.

And just to prove it would be cool, here's a mockup of what Darth Maul might look like if he'd been made in the '80s: 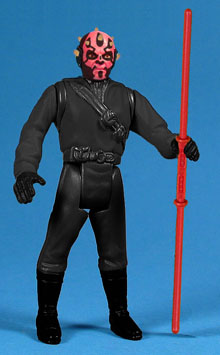 No matter how they feel about the prequels, everybody loves Darth Maul - and being able to add him to a vintage collection would be neat. It'd also be an opportunity for to create characters that Kenner never got to, like, Grand Moff Tarkin or Slave Leia. So come on, Hasbro: start something new by doing something old...

This entry was posted in addendums, customs, Kenner and tagged Star Wars. Bookmark the permalink.