There is a monster stalking the streets of New York City, and Peter 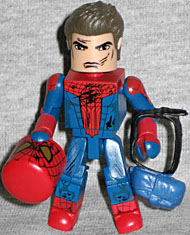 Parker is partially responsible for its creation. He must use all of his powers to stop it before the city he lives in is changed forever!

We already ragged on the new movie Spider-Suit, so let's not repeat it here. This is the "Battle-Damaged" version, which means it's functionally identical to the other figure, just with a few more paint apps to suggest cuts and scrapes. Compared to other BD Spideys, there's almost nothing done to him - if no one told you he was supposed to be damaged, you wouldn't guess it immediately. The figure's mask is removable, allowing us to see Peter Parker's face beneath. He has scrapes painted on his forehead and cheek, but he certainly doesn't look hurt. The set includes poofy Edward Cullen hair for him, and his blue backpack.

The Lizard was once Dr. Curt Conners, who sought to regrow his 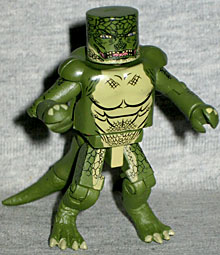 lost arm. Peter only wanted to help, but instead helped Conners shed his humanity. Now the man is no more: only the Lizard remains.

Many people were unhappy with the fact that the Lizard had a flat face in this movie, but it works out very well for the Minimate. Since they didn't have to mold him a new head, he instead gets a powerhouse chest cap, new lower legs to create his digitigrade stance, and a three piece tail: tip, mid-section and a specially designed waist cap to plug it into. The tail has two balljoints, for maximum poseability. His shins and tail are sculpted with scaly detail, while the rest is just painted on. It looks really good, though! Lizard comes with a clear disc base to help him stand, but he doesn't need it - the tail acts as a tripod.

Lizard's cool, but the Spider-Man he comes with is pointless. These two will also be available in an SDCC-exclusive "Sewer Battle" set, so you may be better off waiting and tracking that one down instead.