Today started early for me after only four brief hours of sleep, being THE craziest day of the Con I had to be sure I was up and ready to drive down and park before 8am to avoid as much of the crowd as possible. Well, I did and upon arriving at the Convention Center, gave my cursory glance towards abominable Hasbro line and got into my proper queue for entry to the floor. 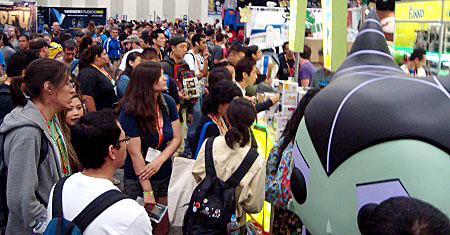 Arriving early the previous two days had afforded me 15 to 30 minutes of a calm Exhibitor Hall so I was looking forward to the same, but it was Saturday and despite getting into the Hall around 9:15am or so it was already pretty busy and only got crazier. I made a B-line to the Lego booth to get in line for that day's Star Wars raffle hoping for similar luck to Friday's (little did I know there would only be one winner that day, so really it was just a complete waste of time). From there it was straight to Funko. The last two years Funko's booth has been one of my favorites - they always have a ton of exclusives and they're always interesting repaints of existing product, plus they never really announce what they'll have (at least through any of the normal channels) so there's a fun bit of surprise. Well, this year their booth has been a madhouse with a virtually impossible to get into line thanks to it having to queue in the middle of the thoroughfare and security capping it before it goes into Artist's Alley. Fortunately there was nothing I "had to have" this year, though I was quite fond of the metallic repaint of Avengers Loki and Fantasia Mickey & Chernabog 2-pack POP! figures. So... I gave up on that, and after 20 minutes of aimless strolling surrounded by a horde of attendees realized I had freedom up above in the panels.

Thus it was that most of my Saturday was spent in panels, with no real loss I'm saddened to say. I managed to make five panels through out day which filled up a lot of time but also allowed for the booth perusal for which I am so fond. This is the most panels in a day I've done since... well, I can't even remember when! The panels were:

In the times between I went to booths I hadn't fully investigated yet and one such booth was QMx's (aka Quantum Mechanix), the folks that make the ridiculously awesome, stunningly high-end spaceship replicas. Famous for the Star Trek Enterprises they unveiled the D year as well the reboot's Kelvin, which I'm still shocked by much I like that atypical design. 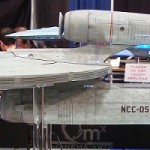 In talking to the folks at the booth I mentioned it was the first Kelvin collectible I'd seen (later I saw that Hallmark is doing an ornament of it too) and she told me that in fact they had made the prototype on their own and only just showed it to their Paramount/Bad Robot rep at the Con for approval to show it to gauge interest (of which there was a lot). Well, I'll tell you - it's phenomenal. They've also done a Tardis with a backlit graphic of the interior that can be seen from the opening door. But the folks at BBC are so cagey they would only provide lo-res images. Fortunately though the rep was on-hand during the Con to hear folks complain about the image so if this piece goes to production it will have a better picture, in addition to sounds and lights. It's also quite possible that they could do a version down the road with a sculpted interior. 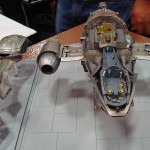 QMx also had a remarkably cool Serenity from Firefly with removable pieces and fully sculpted/decorated interior - how cool is that!? But the one piece that really surprised me was their Mark II Viper from the modern Battlestar Galactica show which features an organic LED screen in the cockpit with full draedus video playing. For the Starbuck edition it even does the sporadic static-y blips from the show! They'll be doing a range of this piece that's customizable, so you can tell them the kind of colors, deco and even name and callsign you want so that you can have a totally personalized Viper, complete with your own name on it! The downside to all of this is that QMx does really low runs, only in the 100s, that they make by hand at their facility in Florida which means they are very expensive items. The quality is definitely there if you can afford the price. 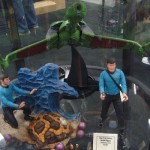 I headed back to DST to find out more about the stellar Spock figure on display. He is the first figure for the new Star Trek Select line, which will follow the other Select lines in terms of providing a fully articulated figure with a diorama base. The twist here, though, is how elaborate the base is and that each figure will have interchangeable lower torsos for standing or action poses. Hence, both Spocks you see come from one pack! How, unbelievably, cool is that!? There's interchangeable hands too. Plus it's looking like TRU will order a version of the line that will include just the "standing" figures (whew, I definitely what both versions on display!). Though Hasbro has the master rights for the new film they apparently are only doing Kreo sets so TRU is kind of desperate for some kind of Trek presence in the Boys Toys section, so it's quite possible we'll see some roleplay and TOS figures from DST there. The next figure will be Kirk, and his alternate legs will be in a kicking pose for an awesome Kirk-Fu diorama! His base will be a section of the bridge complete with Khan being knocked back into it!!! Khan will be a non-figure, much like the goon from that first Punisher figure at the beginning of Marvel Select. I can't express how awesomely blown away I am by the Spock figure and the genius and ingenuity of these first two figures. Truly a perfect use of the Select format and a great new spin on it! Kirk and Spock will be released close together if not at the same but the concept of the line will be Trek heavy hitters so don't expect to complete crews (I remember Picard and 7 of 9 being mentioned as possibilities down the road - here's hoping for a Battlin' Bat'leth Worf!). While I obviously would also prefer to do the crews, frankly the promises made by the Kirk and Spock sets are so fantastic I simply don't care, as long as this great quality and ingenious design keeps going (besides, I can foresee doing figural two or three packs down the road for the same cost as the alternate legs and elaborate bases, so... fingers crossed for as much Trek as possible!). 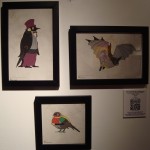 On the way to dinner I made a quick stop by the "We Can Be Heroes" Gallery in the Gaslamp District. This is DC's new charity organization to which proceeds from some of their stuff goes. I ignorantly didn't bother to find out more about the charity while there because I was too busy looking at all of the artwork, which is presumably on sale as a fundraiser. I came for the Lego sculptures Nathan Sawaya mentioned in the BrickJournal panel and stayed for the paintings. They varied in style and subject but all involved DC characters in some capacity. Most of it was good, but there were a few bad pieces as well as several great ones.

Saturday then culminated in the annual Comic-Con Masquerade - a festival of home made costumes and skits. Some time the folks just walk out and around the stage showing off their costume, other times the emphasis is more on a comedic sketch (for instance this year saw Halo soldiers dance off to "Party Rock" against the Kia Hamsters). Between the occasional fantastic costume and the jovial antics of MC's Phil and Kaia Foglio this has become a favorite tradition of mine, and with the Comic-Con Documentary having followed a Masquerader the fun of it all was fresh in my mind. In fact, I'll bet that documentary did a lot to boost attendance as the line for the event's Ballroom 20 wrapped around the upstairs floor by 5pm (the Masquerade started at 8:30pm) and I ended up in an overflow room which was fuller than I remember in previous years (that's okay because the fun of the overflow room is the ability to heckle, which juggles between hilarious and obnoxious). Sadly though, I must confess this was the weakest Masquerade that I've been to. 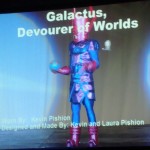 No costumes really had that oomph or staying power than I've come to expect, like 9' tall Hulk I saw once, or the Mass Effect and working War Machine armors shown in the Comic-Con Doc. The best one was probably a guy's Galactus, complete with Silver Surfer figure flying off his shoulder, and while it's far better than anything I could make it just wasn't "at that level." One pair made full foam and rubber Lego mini-figure costumes of Lego Boba & Jango Fett (complete with lifesized Lego weapons), so that the limbs moved and bent the way they do in the games. That was an impressive feat, but still a little, well, bland just due to the nature of Lego mini-figs. Neither were there any memorable or good skits (one year a team did "Blackest Night Space Ghost" - that was pretty awesome). 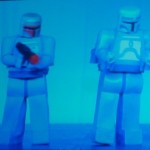 It was a good time, but not a very memorable one. Fortunately most of the bits were short so all 36 entries (though there were 4 or 5 no-shows) were done by 10:30, which is pretty early by Masquerade standards. I stayed an extra half hour to watch the half-time entertainment, which was mock Lightsaber duals by a club (a few members of which definitely took it a bit too seriously), and by 11 I was headed back to the car so I could catch up and on much needed sleep.

You'll note something missing from this post: a haul photo. Indeed, for the first time I can remember I did buy a single thing (other than food) all day. The shopping this year just isn't that good. Add to that the heavy crowds and the lingering remorse from mis-buying that Magneto bust and it's a perfect storm for shopping abstinence.

So here, instead, is a picture of the kind of thing you can only see at Comic-Con: a hot pink Gorilla dancing in front of a gathering of Nazi sex-kittens from the upcoming movie Iron Sky. 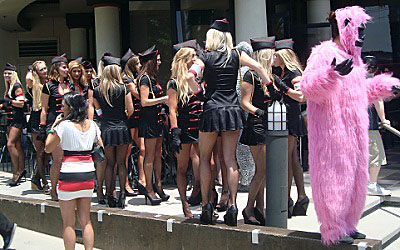 This entry was posted in SDCC and tagged SDCC 2012, Star Trek. Bookmark the permalink.