I've been hearing about the movie Solomon Kane for a long time now. In fact, it was made about three years ago and so far has only seen release overseas. Regardless, everything I'd heard was very positive and promising so it was with a great deal of excitement that I learned I'd made it into a screening here at Comic-Con 2012. 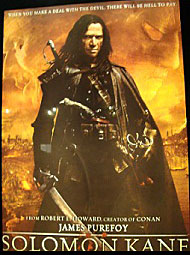 Once we got into the theater we found a pretty cool Solomon Kane shirt on every seatback, so in addition to the "where am I going to sit" debates and eagerness there was "where are the ___ size shirts?" Ultimately we ended up trading sizes between aisles in a decent bit of social kindness. Then, to make matters sweeter, at the end of the screening we were handed copies of "the official magazine" for the movie - it's basically a trade paperback with tons of photos, art and text from and about the movie - very cool! But that's not all because director Michael J. Bassett, producer Samuel Hadida, and star James Purefoy were there in attendance too! They came out to say "hello" and introduce the film before screening it.

Solomon Kane is a cool, fun dark-action film. There were lots of mentions afterwards of Games of Thrones and it absolutely fits in that world of "realistic, gritty fantasy." In fact, overall it felt like a 2010s companion to the original Conan film, fitting as both characters were created by E. Robert Howard. However, the movie isn't quite as good as either G.o.T. or Conan. When there's no action going on it becomes a bit slow and none of the characters or performance are really engaging enough to keep you excited during the "not a mission" portions, but that's not to say that it ever really lost me or I got bored. The ideas and concepts at play here were very cool and in a sense made Kane basically a mashup of Hellboy and Batman, yet it pulled it off while remaining fresh and original!

Kane is a wicked sort of marauder at the beginning who murders his way to a treasure only to have his very soul attacked by Satan's Reaper (for me, the most excellent bit of the entire film, Nazgul-ish as he may be). He escapes and retreats to a monastery and reforms his ways to save his soul which then sets up the fact that he no longer wants to do violence but we, the audience, can tell this is a character who, to quote Dead Alive "kicks ass for the Lord," so how and when will he revert to bad-assery? Along his journey he meets up with (the sadly since-deceased) Pete Postlethwaite, his wife played by Alice Krige and their children, Rachel Hurd-Wood (Wendy from P.J. Hogan's most excellent Peter Pan) and her real life younger brother who happens to look exactly like her. There's also cameo/bit-parts by Mackenzie Crook, Jason Flemyng and Max Von Sydow (further drawing that Conan connection). Sadly, the dialog can become weak and James Purefoy lacks some of that leading man charisma needed to hold the film together, though he certainly isn't bad - far better than Hugh Jackman in Van Helsing, who this character, sadly, resembles quite a bit.

It's not great, but I definitely recommend this movie. If you collect toys, especially NECA and McFarlane type stuff, this movie is right up your alley. It'll be released to Video on Demand in August and then theaters in September - I highly recommend seeing it in theaters though! Not only does that help boost chances of a sequel, this is absolutely a movie for seeing with an audience. The applause, the hoops, the hollers, the collective build of tension, etc. - it all really helps drive this movie and keep you into it. In theaters it's a cool, serious Fantasy film along the lines of '80s classics like Dragonslayer, but at home I'm sure it'd play like a better-than-it-should-be C-level movie, unfortunately.

But I am serious, if you're into this sort of genre, this movie is worth two hours of your time. The action is between good and great, with some really kickass moments but the overall tone and spine of the film is fantastic. A 16th or 17th century superhero who is only good at killing, but if he kills people Satan will get a bead on him and come after his soul. This is pretty cool stuff, friends.

After the film, James Purefoy, the director and producer came back out for a little Q&A (moderated by AintItCool's "Capone") from which I now present to you some highlights:

- Purefoy has never been in as much pain as he was when filming this. It was typically -10° on location and the director had it raining most of the time. At one point, Purefoy was sitting on his chair between takes and when he was called back and tried to stand he simply fell forward on to the ground - because his clothes had frozen solid.

- This movie is the director's take on the character. He was original brought in as a writer but was such a fan and so passionate he directed it as well.

- The film is inspired by the very few lines in Howard's stories about Kane's past, so in essence this movie is a prequel to the original stories. The director wanted to establish the world and character before just jumping in to the adventures.

- Purefoy likes this character who is deeply religious but also very violent.

- Everyone is open to doing a sequel. The director wants to take the character to Africa, possibly fighting slave traders, and examine the origin of Kane's Staff (which is not in this movie). He has a scene in mind that puts Kane on bridge over canyon with a flaming lion on both ends of the bridge headed in for Kane.

- Purefoy was asked about a John Carter of Mars sequel - "Unlikely"

- Both Purefoy and the director wanted to make sure there was no sexual or romantic line between Kane and the girl (Hurd-Wood), it's just not appropriate at all to the character or story, so they made sure to cast young and innocent

- Purefoy is asked about rumors of him playing The Saint, the questioner says he thinks Purefoy would be great in the role. Purefoy agrees but says pretty firmly "but it will never happen."

- Purefoy is playing the most despicable serial killer "ever" on the new show The Following with Kevin Bacon. His character is based on three real serial killers, two of whom are still alive, but they will never name those killers because they are massive egomaniacs and would completely get off on knowing they were references and basis.

This entry was posted in blog exclusive review, SDCC and tagged SDCC 2012. Bookmark the permalink.