This year marks my 15th San Diego Comic-Con (yes, all consecutively) and also holds several firsts for me. Thanks to the delightful surprises of last-minute work plans all of my core group of friends couldn't make it so I am Con-ing stag this year. Also, in an experiment to save money I am staying out in the four-mile-away "Hotel Circle" (more as a result of SDCC not giving me any of my 20 top choice hotels). I'm opting to drive in daily so that I have a stash to make drops at, and am not tied to the buses (which I hear can take 90 minute full trips) but parking will no doubt be a nightmare, though tonight was no trouble, really.

Preview Night is typically a pretty rough ordeal as I want to go meander the booths, hit the toy manufacturers for new reveals and queue up for exclusives all simultaneously and with equal fervor. This year was a bit less so, for some reason, so I was content to fold the latter two in while focusing on the former. The cause of this, though, was a weird haphazard path that rendered me not having seen the whole floor, nor being as productive as possible with exclusives (though I was able to cross-off Bluefin, October Toys, DKE, NECA, Mezco, AFX and Gentle Giant).

Highlights of the night! 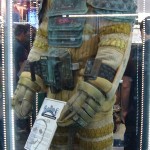 Profiles in History is a prop auctioneer and, though a small space, has become a mandatory repeat visit for me as they always have some amazing pieces on display. Their "weenie" (in theme park parlance) this year is a complete spacesuit from Alien. Ho Boy is that thing gorgeous in person! They also have a complete-with-rigging Mohawk Mogwai from Gremlins 2, a Mondeshewan and Mangalore heads from Fifth Element (the latter complete with animatronics!) and most awesomely - General Kael's helmet from Willow! 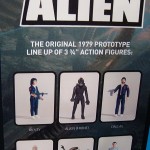 Speaking of Alien, the company that's making that giant metal toy Stormtrooper (I forget their name) blew me the eff away by revealing that they are making the unproduced 3¾" figures sculpted way back in '79! I was just looking at photos of these over the weekend, too! They've spent a couple years negotiating with Fox as well as tracking down actual prototypes of both the figures and the packaging. This could be a fantastically amazing new range of retro/nostalgia collecting! 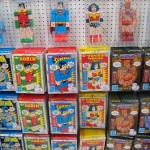 Last year the new company Mixo caught my eye with their figural-painted tins so I was right keen to check them out again and see what as new. Well, paper is what's new! The tin cans came with paper-builds inside them as a bonus but now they've added a new range of blocky paper "action figures." The MotU ones really grabbed my attention, I think I'll be getting those by the end of the show... I really love Silver Age DC so those ones are tempting too. 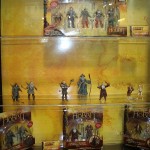 The Bridge Direct bursts onto the scene in a big way! Sure they've done Bieber and Arthur Christmas nonsense in the past but landing The Hobbit license seemed like quite a coup and also a potential nightmare. Well think again, these things turned out great!!! They have a bunch of 3¾" scale figures on display and, well yeah, they just look great. Not quite Hasbro/Star Wars great, but better than most everything else I've seen at this scale. I spent a good chunk of time talking to one of their reps and here's some fun tidbits: the Beast Pack line won't be horses (implicitly it'll be wargs and/or bad guys); WB is reigning the reveal leash pretty tight so don't expect to see much more until September 1st; there will only be two series of product for movie 1 - October & August; more awesomely though? They have Lord of the Rings rights!!! Ohmygodohmygodohmygodohmygod - 3¾" Helms Deep battle scene!!!! Yo necesito! They've begun work on any LotR product yet so we won't see anything until 2013 at the earliest. Oh, and a bunch of their team apparently came from ToyBiz, and Gentle Giant is handling all of the sculpting duties. 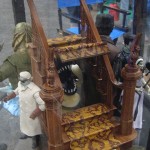 And then we get to DST, my beloved DST. Sure I rag on them from time to time but it's only because I am so wildly passionate about their product and company. Well, the hits keep on coming with Munsters Series 2. I nearly fainted when I saw the new build-an-accessory... it's a full staircase with hinged stairs to reveal the pet Spot, who is an articulated head that can swing out and has removable fire blasts for his nostrils. HOW!? How can something so big and awesome be workable!? I love DST!!! Chuck's not sure exactly how the whole thing will be broken up but it'll probably be like wall, wall and stairs/Spot. Sadly, though, we'll have to wait until October 2013 for this line to come out. On the upside though, he and Jean St.Jean have talked about revisiting Creature From The Black Lagoon as a more highly articulated figure in the future. Begin the letter-writing campaign now!

And with that - I must go to bed! Tomorrow brings longer hours, the first wave of Panels, and even more shopping! 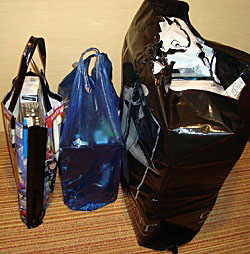 This entry was posted in DST, papercraft, SDCC and tagged Alien, LotR, SDCC 2012. Bookmark the permalink.