Swamp Thing, Plastic Man, even the Wonder Twins all came in fancy, over-designed boxes. And there have been ones with play features before, like Man-Bat and Solomon Grundy, but even they don't hold a candle to this year's. The outer box has the Dark Knight Rises logo wrapped around it - not the cool broken buildings one, just the "shattered" version. 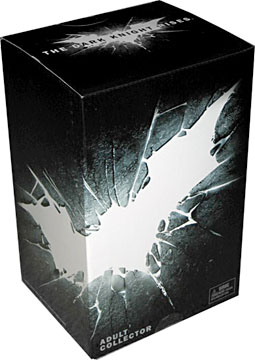 When you remove that outer shell, you'll find a box depicting stately Wayne Manor. The building is three stories tall on the ends and four stories tall on the sides. How's that possible? Weird architecture, to say the least. What is presumably the door can be found on one of the sides, while the Batsignal shines in the sky on the ends. Lights are on in many of the windows, allowing us to see two silhouetted figures - one near the door, a man holding a wine glass, and the other on the other side of the house, possibly carrying a tray. Easy enough to guess who each of those are supposed to be, right? 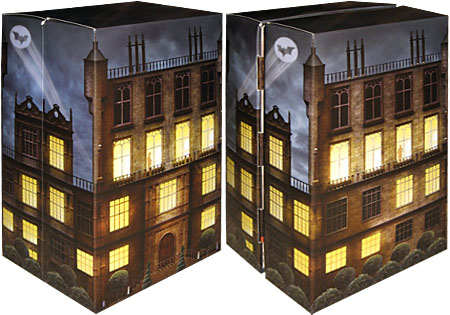 You can then fold open the halves of the box to find billionaire playboy Bruce Wayne, apparently strolling through his library. The walls are lined with bookshelves, there are three (none-too-comfortable-looking) chairs against one side. There's recessed lighting in the ceiling, and it reflects on the floor. I'm not sure that would be the best lighting for a library, but hey, he's the billionaire. The left hand side features a piano, also something that may not be conducive to the contemplative environment of a library, but it's not like he'd have to worry about other patrons, would he? No librarians to shush him. The piano is a "Pancello" model, which tells us that this packaging was designed by Frank Varela (it's his nickname). 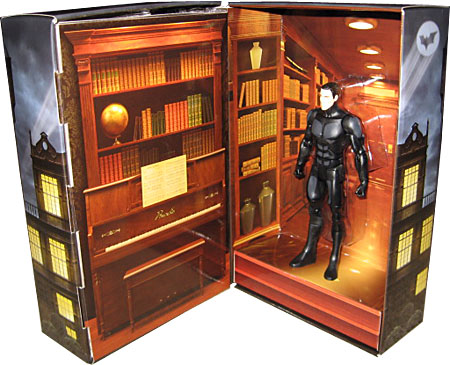 In Batman Begins, the entrance to the Batcave was opened by playing three two-note chords on the piano, starting three octaves above middle C: C#-E♭, D♭-D# up an octave, and F#-G#. However, the keys he presses are D-E, D-E up an octave, and G-A. This may not be a mistake, since older pianos are sometimes tuned down a half-step, to reduce the internal stress on their aging frames, and the Wayne family piano is sure to be an heirloom. And perhaps leaving the piano out of tune is a defense mechanism: Bruce wouldn't want someone wandering into the library during one of his lavish parties, sitting down to play the piano, and accidentally hitting the right combination to reveal the entrance, would he? Of course, the odds of anyone hitting it by accident are incredibly low anyway.

It's easier for you, though: Mattel put a pressure-sensitive button right under the piano. Press it once and the box plays the three notes. That entire side then opens like a bank vault (complete with matching graphics) revealing the Batsuit waiting in its storage compartment. At this point there's supposed to be another electronic feature - yellow and blue lights flashing, accompanied by thunder and bats chittering - but mine is broken. I can get it to work sometimes, but it doesn't happen automatically when you open the vault, as it was intended. On the plus side, Mattel has finally followed Hasbro's lead and used paper twist ties to hold the figures in place, rather than plastic-encased wires. 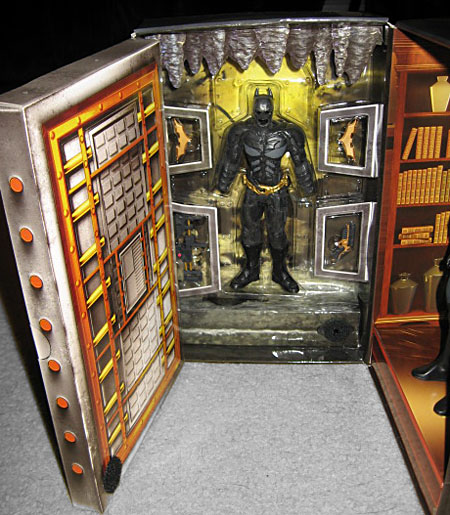 This is the second time we've gotten packaging representing the Batcave, but this is a much more ornate offering, naturally. It's definitely a cool design, but at what point does a package stop being a presentation for the figure inside, and start being an entity of its own?

This entry was posted in addendums, Mattel, SDCC and tagged Batman, SDCC 2012. Bookmark the permalink.