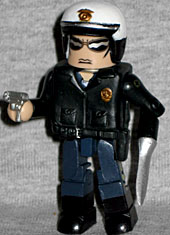 When Toys Я Us declined to carry the planned second series of Terminator 2 Minimates, it fell to Diamond to be the only source for the toys - but orders were still very small, so these are hard pieces to find. This is actually the second time the Motorcycle Cop version of the T-1000 has been released: the first was in the single-boxed counter dump, which means it might as well not exist. That one was all silver, while this one is in color. He's wearing reflective shades, and his bulbous helmet is painted white and black, with a silver stripe on the visor and a golden badge on the forehead. His coat is molded with pockets, a badge, a holster and a radio. Finally, there are yellow stripes down the outsides of his legs. He comes with a silver pistol, and an

alternate "blade" arm that can replace either hand.

If you remove the chest cap, you'll find a slightly damaged police uniform. There are three silver ripples on the front, suggesting he's been shot. The arms on the body are black, to match the motorcycle jacket, but if you have the other T-1000 Minimate, you can swap them out. It may not be anything from the film, but it adds some variety and playability. 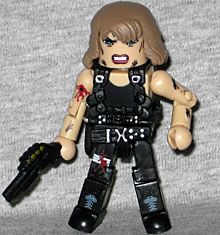 One of the cool things about the T2 Minimates is that the Battle Damaged figures, rather than being a handy excuse to crank out a cheap variant of a main character, are actually iconic looks for the characters. Look at Sarah, here: all through the film she's been chased, stabbed, sliced, shot and generally beaten up, and this figure duplicates every wound. She's got scrapes and bruises on her arms, a bloody bandage on her right leg, and a finger-sized hole painted on both sides her shoulder. Her webgear is the same the Cyberdyne Assault Sarah Connor, and she comes with a Remington 870 tactical shotgun. Her hair is new, and she has a furious look on her face.

The T-1000 is not overly impressive, but this Sarah Connor is great. The only drawback? The trouble you'll have to go through to find them.