Rustin's Spoils of the Week #72

Continuing on with some August purchases we get a selection of figures here that I picked up during my life on the road as man of business traveling variety. 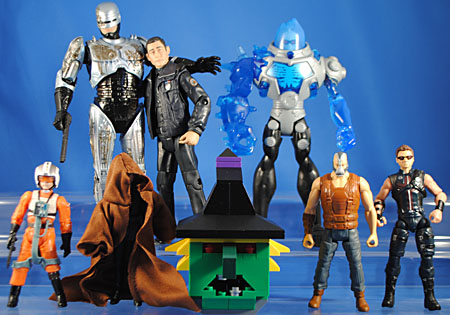 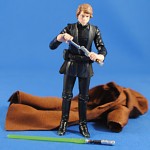 Finally found this guy at retail - now if only I can find the rest of the series... this is a really good Jedi Luke. I like the likeness and the body/torso are well sculpted. The "skirt" is a combo of sculpted plastic and softgoods and it works surprisingly well both functionally and aesthetically. He has swivel wrists with horizontal hinges on the hand, like various GI Joe figures, which is cool. He of course comes with his lightsaber, both ignited and just-the-hilt, but also includes the calipers seen in the infamous deleted scene showing him constructing the saber (it would have been cooler had they done a new "open" sculpt of the hilt) plus a removable utility belt - pretty cool stuff. He also comes with a brown cloth robe which epitomizes why I hate softgoods - not only does it not look very good, it's actually in a 5" scale, amazingly, and thus is right awful on the 3¾" figure! Ignoring the cloak, though, this is a pretty solid variation on a costume we admittedly have plenty of already. 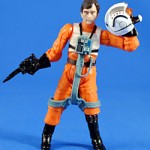 Deferred from last year our third figure of Wedge finally lands and, just like the first one, disappoints. I'm not very sold on the likeness... it just doesn't look much like Dennis Lawson. Most annoyingly, though, is that since this is just a headswap with Pilot Luke the waist band still had a peghole for the non-existent lightsaber hilt. It's a small detail but still a noticeable one that also holds this back from being anything close to a definitive Wedge. 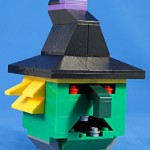 This year's new Halloween polybag is a Witch Head. Seems like a weird choice at first but it's actually a cool piece and fun little build. You see, much like the Valentine's Day Box this is designed to be a pseudo jack'o'lantern in that the hat doesn't actually snap on to the head, so you can store things in there should you so desire. Interestingly, and cool-ly, the eyes and mouth have some open space, again suggesting a jack'o'lantern, and I dig that quite a bit. This is a really neat set and fits in well with the re-released 2D Halloween creatures from last year. It's likely this is a Lego Store exclusive, so you may have to do some hunting to score this, but for $5 it's pretty cool. 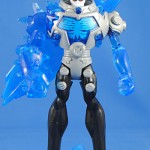 The figure I was most after from this new misadventure in Batman toys is now, at last, mine!!! Despite my nay-saying with the rest of the line I like the creative license taken here. The translucent chest with painted on ribcage is an interesting and visually appealing look as is the "ice armored" right arm. His helmet is removable, and the head has a swivel joint below it. What's most weird about the figure is that his whole right arm is cast in a soft, rubbery plastic, as is the upper left arm even though the lower left is a hard plastic. Whaaaa....? Both shoulders stick in their pegholes and really feel like they're about to break off with every turn, plus the left arm can't really stay up since the forearm is so much heavier than the bicep piece. For a weapon he gets a massive ice sword, which actually is two pieces so that he could wield dual swords if need be. Plus, it has a neat hole in it that fits over a mech bit on his back. 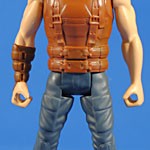 I picked this up at a grocery store which was having a sale on 4" Batman figures for only $1.50 each - so hell yes I got this. Interestingly he was on a smaller card and had no tray (indentations on the blister held him in place) so this must be the "dollar store" version of the line. This is Bane in as close to his movie colors as is available and like the other figures he moves but at the Big 5. For a buck fifty I'm pleased with him, and the light gray outlining on his mask is better quality and attention to detail than I'd expect from the line. 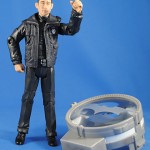 At last, a toy of J.G.L.! I like the new police coat for him, it's really helps unique-ify him on the shelf despite this not being his costume with the most screentime. His hands are sculpted in "gun firing" pose but for whatever reason the left one on this particular figure is in a very noticeable "I'm squishing your head!" gesture. He comes with the bat logo lens for the front of the Bat Signal BAF and it's a nicer piece that you might expect, there is some real heft to that lens. But of course the real star here is the likeness. Simplified to the standard, soft Movie Masters aesthetic it is still immediately recognizable at the boy phenom himself. I'm quite happy with the figure and am glad to have him in the collection (now, if only I can find Ra's...). 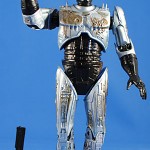 I was on the fence about this figure. It was different, but was it really different enough? Well, after reading our review I was more-or-less sold. Contrary to appearances and expectations this guy is actually about 90% new tooling! I really appreciate that they went to that trouble and dedication, but (absurdly enough) I'm not sure it was worth the trouble. I was still a little unsure even after making the purchase, but heck - if I have seven Freddy Kruegers I might as well have two Robocops, plus this would allow me to have the spike hand on display too! This, like the first and undoubtedly next, is a really solid figure and enough articulation and range to allow for some fun poses. I'd love to them continue this line a bit further and gives the Robocop 3 version with jetpack and gun-hand, an un-helmeted Alex Murphy and, most importantly, ED-209! If NECA will go to the expense of tooling up almost an entirely new figure I think that pretty firmly shows some real dedication to the license and suggests they may too have some future plans in mind.

This entry was posted in Hasbro, Lego, Mattel, NECA, Rustin's Spoils of the Week and tagged Batman, Robocop, Star Wars. Bookmark the permalink.

9 Responses to Rustin's Spoils of the Week #72