Some say he's made from injection-molded plastic, and that his legs are completely hollow. All we know is he's... the Stig's Lego cousin. 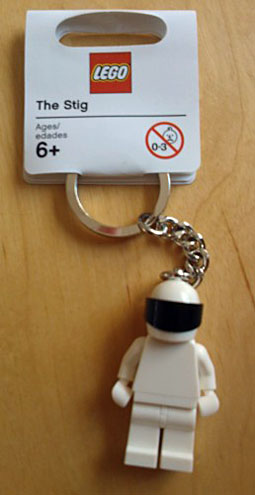 Now, this won't mean anything to most of our readers, but I've recently started watching Top Gear on BBC America - I find it makes nice background noise while I work, in that it's funny enough to be interesting, but plotless enough that I don't get wrapped up in what's happening instead of what I'm supposed to be working on.

Anyway, the driver who runs the cars around the show's test track is a mysterious, white-suited enigma known as The Stig. He's always introduced with a list of silly facts about his life ("Some say if he caught fire, he'd burn for 1,000 days."), and his identity is a closely guarded secret. However, in the October issue of Top Gear Magazine, there was a code that gave you the opportunity to buy an official Lego Stig keychain.

Here's a video they released promoting it:

I don't suppose we have any UK readers who are feeling generous, do we?

This entry was posted in Lego, videos. Bookmark the permalink.