According to The Hollywood Reporter, the actor who played Scut Farkus in A Christmas Story is suing NECA. 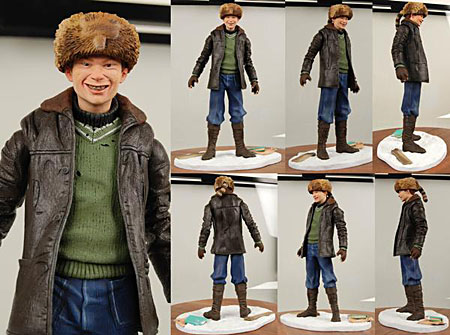 He's not suing over the action figure, but over a Christmas Story boardgame NECA also put out:

At issue is whether the National Entertainment Collectables Association, which licensed the rights to make toys based on the movie, owes money to one of the film's actors. Most of the actors signed contracts that provided for set merchandising royalties - but not Zack Ward, who played the bully Scut Farkus at the age of 12. During production, the filmmakers had Ward trade lines with one of the other child actors, making the role of Farkus bigger than was originally intended. However, the producers failed to then upgrade his contract to control his publicity rights.

Ward was shocked in November 2010 at the annual Christmas Story charity fundraiser convention in Cleveland, Ohio, when a fan handed him a Christmas Story board game that showed his face on the box and the game's playing cards. Later, Ward also discovered a calendar too. 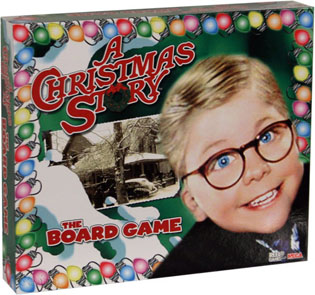 Ward, now 42 and still acting (he's had small parts in Transformers and CSI: NY), sued because NECA had allegedly tricked him into signing away rights for a Farkus action figure when the company realized that its deal with Warners didn't cover all of the actors.

Ward briefly sued Warners too, but dismissed that lawsuit when the studio gave him some cooperation. Now, in a lawsuit against NECA, he has told the judge, "I am sure the Court can imagine my feelings of humiliation and anger at the Defendants for having purposefully defrauded me."

During a deposition, Ward, nervous and attempting to lighten the mood, slipped into a Dr. Evil voice and said, "One billion dollars" when asked how much he wanted. NECA has responded that the lawsuit came too late and is prepared to have experts testify that $6 million in claimed damages are overstated for a board game that grossed about $750,000 in sales.

Kent Raygor, the attorney for NECA and its president Joel Weinshanker, says "the parties reached agreement on terms of settlement" after a mediation session earlier this month.

But Randall Newman, the attorney for Ward, insists there are still "major issues" to be resolved, among them being that his client is adamant that any settlement not be confidential.

What's weird to me is that even though it initially seems like he has a case (because his contract was originally negotiated for a smaller role and omitted likeness rights for merchandising) it gets a little fuzzy when it says that NECA did meet with him and then somehow "tricked" him into signing over his likeness. how, exactly, he was "tricked" isn't established in the article.

This entry was posted in commentary, NECA. Bookmark the permalink.