What do we have here?

Okay, WHAT is superstar Sandy Matteo carrying around in her Aaron Walter bag? 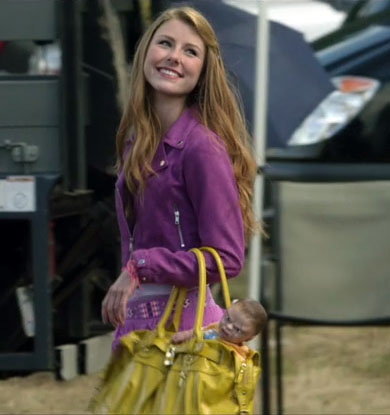 That's some doll we've never seen before! OMG! Our sources tell us it's called "Baby Joy Rage," and it's going to be THE hottest toy this Christmas!

Okay, no, we haven't been hacked, and we're not changing our focus. Are you familiar with the show Leverage, about a team of con men and grifters that take on big corporations to help out the little guy? Well, tonight's episode (airing at 10/9c on TNT) is called "The Toy Job" and is all about the team trying to fake a hot toy.

The writers of Leverage do their research, so when the characters talk about the underhanded way that businesses work, the things they're saying are generally true. And having seen a screener of tonight's episode, this is one any toy collector is gonna want to watch. Not necessarily because you don't already know these things, but because seeing someone talk about them is so rare. When was the last time you heard someone on a tv drama talk about toy companies bidding on shelf space at the big retailers? How about store jargon like endcaps, action alleys or sell-through rate?

The doll in question, Baby Joy Rage, was apparently conceived by show co-creator John Rogers - who also writes IDW's D&D comic, did the first draft of Transformers, and created Blue Beetle. It was designed specifically to be mean and ugly, to contrast with people's notions of the sweet, happy world of toymaking.

The episode delves into the kind of hidden marketing that goes into making some stupid toy the year's newest fad. As summed up in this exchange:

"Why is it that people give each other Christmas presents?"

"No, because they're being programmed by these giant corporations that do all this research, figure out how to push these psychological buttons in people to make them get these presents, right? Make no mistake, what we're doing is we're manipulating fears and making these toys, all of it, this - this - is Christmas."

They also point out the inflated influence of mommy bloggers.

Toy blogs? That's us! Maybe we were hacked after all!

The show airs tonight, so watch it and see a different side of our hobby.

1 Response to What do we have here?